The disorienting images that open David Fincher’s film Fight Club lead the viewer through a fragmented, dramatized trip into the enigma of the human psyche. Sigmund Freud’s articulation of the id, ego, and superego is manifested in visual discourse to show how the metaphor of superimposition hypothesizes the existence of a precocious desire. This want lays at the heart of the psyche that is developed through a journey of introspection and self-mastery.

The id is pictured as the embryonic, naturalistic segment of the mind that encloses sexual drives, violence, and fractions of the past. The ego is the authentic measure that winds its way between the id and the superego. And the superego functions as an advocate for morality and consciousness. These three parts work together in Fight Club to transcend the limitations of the mind resulting in the narrator’s realization of a higher psyche. The id is the instinctive element of the psyche. It encompasses the biological components of personality that are present since birth; namely, libido, life, and Thanatos. The id lacks consciousness and responds to stimuli impulsively. In fact, it only engages the primordial process of thought that is irrational, fantasy oriented and lacks logic.

In Fight Club, the fragile parsimony of the id is revealed during the support group meetings. Edward Norton tries to find comfort from a banal, analogical life that he is trapped in through lies and libels. He uses fake names because the less developed, biological part of his psyche is operating and completely lacks direction at this point of the film. To him, the agony of others is exquisite and enables him to cry and find freedom in sleep. 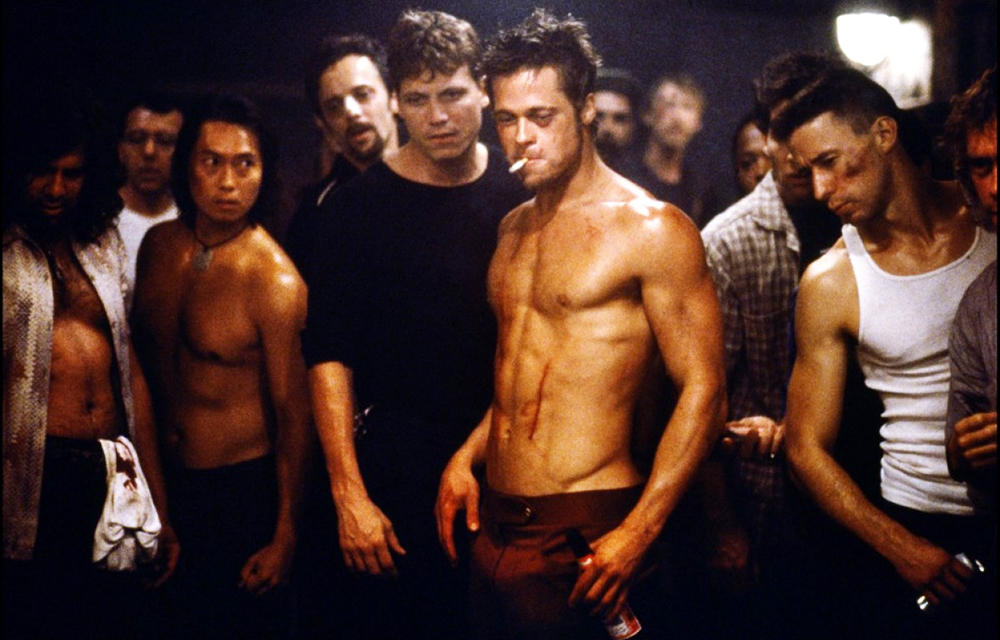 During these group meetings, the leader tells the patients to picture themselves as standing in front of a cave introducing the complex of Oedipus which is a psychoanalytical trait that is present throughout the whole film. Freud introduces this complex in his  Interpretation of Dreams. It is characterized by a desire in a person into the sexual immersion with the parent of the opposite sex, resulting in a rivalry with the parent of the same sex. In Fight Club this is found in the relationship between Tyler and Marla. “Except for their humping, Tyler and Marla were never in the same room. My parents pulled this exact same act for years” and “I’m six years old again passing notes between parents” (Fight Club). Freud suggests a vision of Eros and Thanatos, here the conflict of the narrator becomes a human organism. The ideal, perfect harmony and dynamism is attained through the notion that the organism’s failure to attain perfection causes a mythical death urge that pervades every biological species. In the film, Marla goes through a metaphorical kind of death that is an introspection in the metamorphosis of the psyche. She is a woman that transitions from fear to power.

The pornographic flashes that Tyler Durden splices in family films during the changeover of film reels’ traces is another indication of the reference to this oedipal complex. Here, the analysis of Leonardo da Vinci in his narration of a childhood memory becomes relevant.  He tells the story of a vulture opening the mouth of the child and forcefully laboring its tale. The tail is the symbol of the male member. The scene of the vulture is a fantasy that is created in the id of Leonardo and then transformed later. This theme emerges when the chromatic image is projected at the movie theatre by Tyler and the child looks deep into the eyes of his mother. Childhood memories in psychoanalysis appear not to be established by experience but rather are the conscious memories that are elaborated with the evolution of the ego. With chromatic dramatization and the symbolism of violence found to trace the libidinal economy inside the view from the primordial id that needs to escape.

Ego is Latin for ‘I’. In the real world, the ego has to do with perception. This develops to arbitrate between the id and the external world. Ego emerges in reason and it involves a general acceptance of what is represented by monotonous Ikea furniture, the narrator’s office job, and the worker threatened by Tyler to go become a veterinary. “Worker bees can leave, even drones can fly away the queen is their slave” (Fight Club). These are all conducts that imply a robot-like acceptance by society. The ego deliberates social authenticities and customs in establishing behavior. The ego, in a similar fashion to the id, pursues pleasure, yet the former is effectively devoted to finding a way in real life to find such pleasure. The ego does not have the power to differentiate what is positive from what is not and therefore indulges into practices that do not cause harm to itself. The film shows that the ego cannot be detached from the world and then imbued with ideas. In fact, this is consistent with Martin Heidegger’s concept in Being and Time of viewing human beings as inherently world-bound. The cosmos and essence of a human being are already connected to the external environment in an individualistic manner that appears to be egoistic and not in line with communal cognitional practices of society. The ego appears to be weak and intractable. 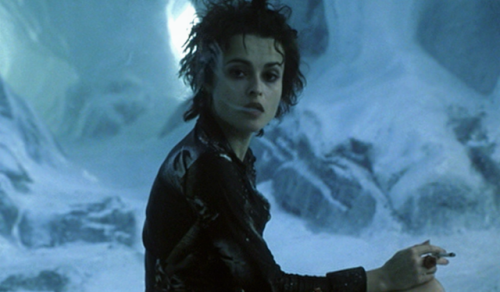 Fight club directs the id into an extremity that is directed subconsciously by the personality of Tyler, yet it is credited as if it were its own. The ego is not able to stand within reality, and this fact causes displeasure and feelings of anxiety in the narrator.  The narrator, at this stage in his psychological development, lives in a fragmented, imprisoned place where emotional and sexual latencies are sedated and guided by the public space that brings out novel ranges of drives. The ego is disoriented in images of order through the enigma of the self.  Mechanisms of defense appear to suppress negative emotions. It detaches its true motivations and feelings projecting the defense into other people’s feelings that are subsequently transmitted into Tyler as a reaction. It acts as a subconscious proposal of the past that makes the antecedent feelings accepted for oneself.

Following this, the narrator winds through the process of self-realization with the emergence of the superego. At this point, the values that are learned by the narrator through the teachings of society and the emergence of Tyler into the narrator’s psyche begin the transition towards the birth of the superego. This develops at an early stage in life that is in line with psychosexual development. For example, when the narrator is initially against the holdup of the store clerk but then recants and gives into Tyler’s power “You had to give it to him: he had a plan. And it started to make sense, in a Tyler sort of way. No fear. No distractions. The ability to let that which does not matter truly slide”(Fight Club). Directly after this scene, the narrator finally speaks to Marla in a gentle way in the kitchen, which signifies an understanding of patriarchal power and the understanding of a suppressed desire for the “mother”.

The superego controls the impulses of the id, including the ones that are not accepted by society: sex and violence. Another function of the superego is to achieve moralistic stasis. In fact, the superego can be divided in two organisms one of conscience and one representing the ideal self. Conscience is the element that chastises the ego introducing feelings of guilt that emerge when the narrator is looking at footage of the burnt building and realizes that it was a wrong action. The ideal self is an illusory image of what someone should be like in terms of career, relationships to other people and in general terms as a member of society. This concept is recurrent in Nietzche’s creation of a superman. “I see something higher and more human above me than I, myself am; help me all to attain it, as I will help everyone who feels and  suffers as I do in order that at last the man may arise who is full and measureless in knowledge and love and vision and power, and with his whole being cleaves to nature and takes his place in it as judge and valuer of things”. 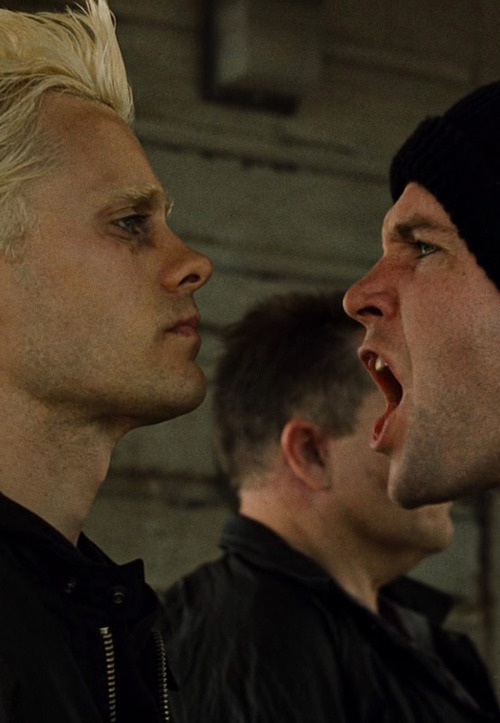 After the various stages, the narrator goes through he is finally shaken by his own drives that with a fight begin to oppose to Tyler and initiate a journey towards self-realization and ultimate consciousness. For example, when Bob is killed in a project mayhem heist the narrator opposes the ideals that Tyler had set. This leads the narrator on a journey around the country to better understand Tyler (himself). The outcome of the evolution of the psyche produces a superior man, a product of a higher process of introspection. The superego is not only temporal; rather, it requires the mastery of the psyche that begins when Tyler burns the narrator with acid and ends with the narrator shooting himself. Death is represented as a mythical phenomenon that functions as a tool to liberate the negative aspects of the psyche. This death gives way to a new liberated, enlightened super-human. The film parallels this concept through the image of Marla that, in the last scene comes to symbolize the resolution of the Oedipus trajectory that has been associated with classic narrative cinema. Consequently, the psyche is altered and moves into a more elevated space.

The id, ego, and superego work together both in time and space throughout Fight Club in a cycle that enables the psyche to grow stronger through mechanisms of power and self-realization. The narrator masters his own person in a new manner that reflects a higher self and it is characterized by the suppression of the id by mythological death, like when he turns himself into the police for being the leader of a terrorist organization to find a new self and rid himself of the burden of Tyler. In the final scene of the film when Marla walks into the warehouse, the narrator no longer needs any of the guys that were part of project mayhem and represented his old life in the cave. In spite of the damages caused by the suicidal impulse, the narrator hides his decay assuring Marla that everything will be okay and that that he is only going through a metamorphosis. The buildings that crumble in front of the two holding hands in the finale function as a metaphor for the destruction of the old unsophisticated psyche that, through death transitions into a liberated self. Through this process, the creation of a self-deterministic type of subjectivity is realized with the ego seeing an evolution from reality to a symbolic construction that rouses the narrator to find mastery and knowledge of the self.