In the movie Gone Girl, an adaptation of Gillian Flynn’s book, we are torn between whether the main character, Amy Dunne is a sexist portrayal of the psychopathic woman or a feminist anti-hero. The response is it’s both, which is what makes it so captivating. The story follows character Amy Dunne, who’s suppressed disappointment and resentment in her husband and dysfunctional marriage/power imbalances leads her to plot revenge against him by framing him for her murder.  Some might be quick to call Amy a psychopath for her irrational, calculous and insane actions. However, Amy’s character calls to attention female rage. This is a silent anger that women in society are expected to suppress and hide. For this reason, some might see Amy as an anti-hero for letting that anger out and treating those everyday disrespects as crimes deserving of vengeance.

Integral to this debate is the “Cool Girl” monologue where Amy Dunne explains the reasoning behind her rage and anger towards Nick and attempts to disintegrate the structure that opposes women to create an genuine identity in order to please men. In these characters we can recognize exaggerated versions of the gender roles we are expected to play to keep up the relationship dynamics and gender expectations

“Cool girl. Men always use that, don’t they? As their defining compliment. She’s a cool girl. Cool girl is hot. Cool girl is game. Cool girl is fun. Cool girl never gets angry at her man. She only smiles in a chagrin, loving manner. And then presents her mouth for fucking. She likes what he likes. So evidently, he’s a vinyl hipster who loves fetish manga. If he likes “Girls Gone Wild”, she’s a mall babe who talks football and endures buffalo wings at Hooters.”

“When I met Nick Dunne, I knew he wanted ‘cool girl’. And for him, I’ll admit, I was willing to try. I wax-stripped my pussy, raw. I drank canned beer, watching Adam Sandler movies. I ate cold pizza and remained a size 2. I blew him, semi-regularly. I lived in the moment. I was fucking game.”

Amy and Nick’s marriage dynamic is not unique. It is pretty common to see men putting less effort in this case, Nick reaches a point where he wasn’t even doing the bare minimum for the marriage. Amy’s expectations were high, yet he can’t even remain faithful to her. Nick moves Amy from the place and people she knows and forces her to adapt to his hometown and his life while he neglects and cheats on her. Nick never seems to consider Amy’s feelings, if he even thinks of her. This forced Amy to go to drastic lengths to get his attention and seek revenge. She feels she has been deceived as this is not the man she thought she was marrying. And him slacking off in their marriage caused Amy to deviate from the role she agreed to play, the so-called ‘Cool Girl’. Amy molded herself into the ‘cool girl’ and when Nick got bored, he moved on to the next.

Amy knew it was an act and a farce but she also believed that if they could only keep up both their acts, their marriage would last and result in happiness, but Nick doesn’t pull his weight which is the ultimate betrayal for Amy, thus, creating her anger. 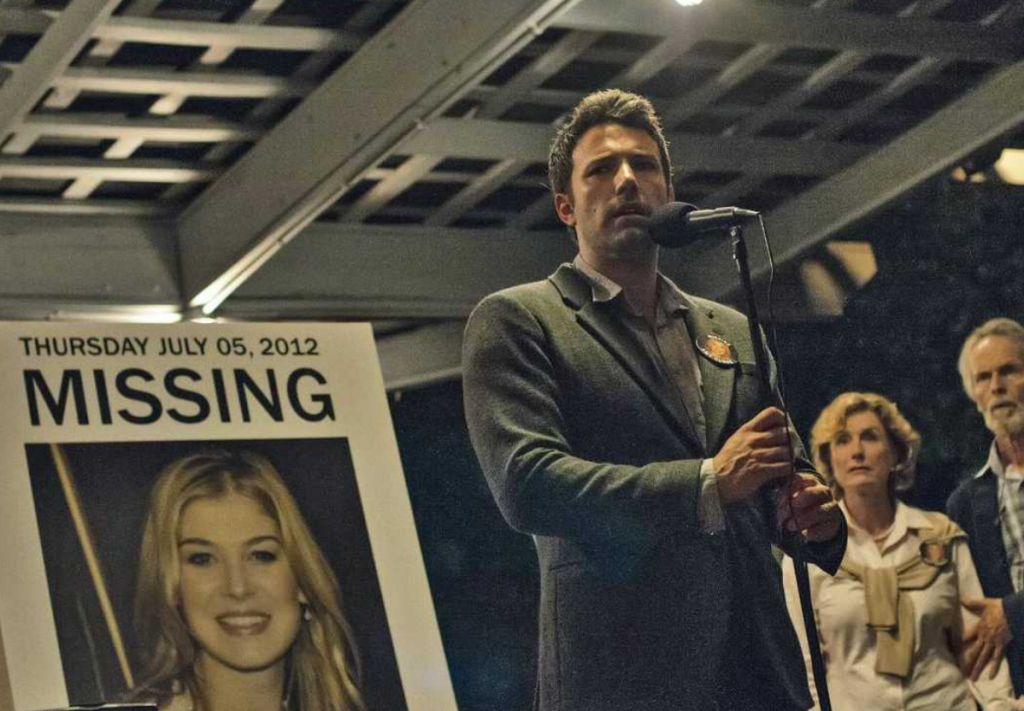 Ultimately, the odds are on his side, as a man, in society on a basic level we accept this selfish behavior in men, where he is allowed to stay ignorant and unaware to all her efforts and sacrifices while the failure of their marriage only takes an effect and impacts her.

“Nick teased things out of me I didn’t know existed. A lightness, a humor, an ease. But I made him smarter, sharper. I inspired him to rise to my level. I forged the man of my dreams. We were happy pretending to be other people. We were the happiest couple we knew. And whats the point of being together if you’re not the happiest? But Nick got lazy. He became someone I didn’t agree to marry. He actually expected me to love him unconditionally. Then he dragged me, penniless to the navel of this great country. And found himself a newer, younger, bouncier, cool girl. You think I let him destroy me and end up happier than ever? No fucking way. He doesn’t get to win.”

Nick seems to deserve some sort of punishment. Nick is not innocent and he is emotionally abusive. He therefore, ruined the woman that she not only was but also who she wanted to be.

“And my lazy lying shitting oblivious husband will go to prison for my murder. Nick Dunne took my pride and my dignity and my hope and my money. He took and took from me until I no longer existed. That’s murder. Let the punishment fit the crime.”

On the other hand, the film has also been criticized as anti-feminist and misogynist for using Amy’s femininity and exploiting it for evil, as well as, the idea that women make false allegations about rape or physical abuse. The story is about Amy terrorizing and dominating Nick and forcing him to be who she wants him to be. However, the idea that a woman character cannot be evil is sexist in itself. As Flynn states “it feels so old-fashioned to think because you write about awful women that you don’t like women. To me it’s worse to only write about good women.” To condemn Amy’s character as anti-feminist because she commits terrible things is a reasoning that depends on the same gender stereotypes the story critiques.

The character rebels against the utopia of an attainable perfection which is replaced by an alternative one of disembodiment. We expect women to accept and be silenced on the day-to-day injustices suffered. While we may not agree with her methods we understand her reasoning and the drive for her madness. This is what makes Amy Dunne one of the few disturbing yet fascinating antagonists, such as the Joker. What makes those villains so alluring is that we agree with them and we are unable turn a blind eye to the truth they’re speaking, despite the crimes they’ve committed.