Over the course of the decades, the vibrant energy and continuous pulsations that have radiated all over the world from the oeuvre of Jannis Kounellis can neither be comprised nor condensed in a single exhibition or individual publication. Starting in 1958 the artist shed his individuality, immersing himself in a vortex of images, thereby setting an energy and a spectacular, magnetic force free within the art system. He managed to express a unique, alternative and radical path-one that is life-, giving painting an organic and concrete dimension. He gave form to an original representation, not feeding on mere repetition, but on continuous change and transformation, in such a way that it remains as much a part of the past as of the present. This attempt to combine reality inaugurated a metaphorical flow that is based on an interior need and an exterior commitment, the outcome of which was an independent, social art. He accomplished this while passing from an old identity to another glorious one in nature. To achieve this political (from polis) effect, he sprinkled it with tradition in order to let it be born again, like a revolution. Every configuration has become a living though that latched into the materials and triggered new sensorial and conceptual energies. All the exhibitions and publications Kounellis designed and produced stand against an ordered, calm linearity, affirming effectiveness and nervous vitality. They are brough together according a process of “accumulation” that respects neither chronology nor formulae. There is a clear desire that does not offer any old reiteration of the already-done and already-said, but rather an additional dialectic explosion between iridescent, mutating materials. Today, all this has become history, making it difficult- if not impossible- to reappropriate Kounellis’s injection of vitality for his anthological exhibition at Ca’ Corner della Regina in Venice. The magical action, supported by his decisions and surprising stratifications, was extinguished by his recent, painful passing. What remains is the reality of his manifestations through fragments that are impossible, without the artist, to lead back to a pure, animated compact whole. Thus, it is necessary to work with the reverberation of his path, trying to present it as an !elsewhere”, now separated from existence. Offering it up in the way in which it has expressed itself over time, rebuilding it as the melting pot of radiating potency: a flow that forms a labyrinth, one dear to Kunellis, in which we can lose ourselves, rediscovering the life of an entity at once fragmentary and capable of reflecting on a vital continuum. 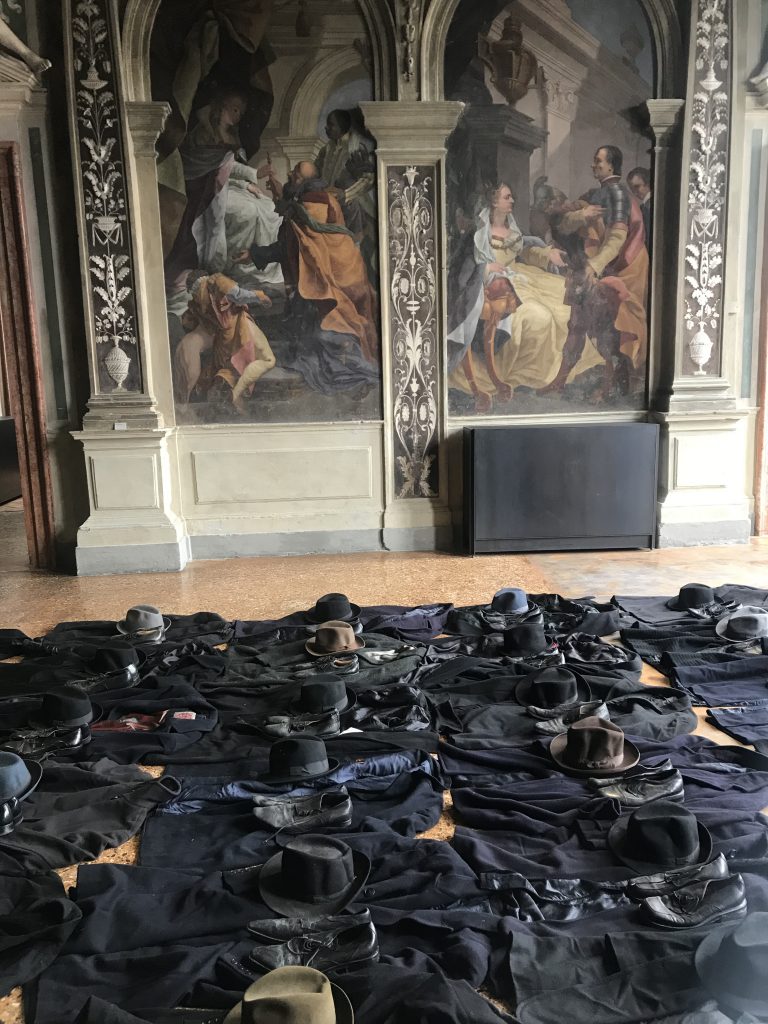 The exhibition presents works from 1959 to 2015, starting on the ground floor with two site-specific installations, and featuring on the first and second piano nobile of the palazzo a historical sequence from his first solo show in Rome to the more complex interventions and multiple installations in the recent years. The artist’s early works, originally exhibited between 1960 and 1966, dealt with urban language. Paintings reproduce actual writings or signs from the streets and at a later phase black letters, arrows, and numbers onto white canvases, paper or the surfaces, in a language deconstruction that expresses a fragment of the real.

From 1964 onward, Kounellis addressed subjects taken from nature- from sunsets to roses. In 1967 his investigation turned more radical, embracing natural elements including birds, horses, soil, cacti, wool, coal, and fire. The artist moved from a written and pictorial language to a physical and environmental one; through the use of organic and inorganic entities, he transformed his practice into corporeal experience, conceived as a sensorial transmission. Having begun to chant the letters he printed on the canvas in 1960, he later explored the sound dimension through which a painting is translated into sheet music- for a cellist to play or a ballerina to dance- while in a 1971 work he had a flautist placed individually in each room of Palazzo Taverna in Rome performing fragmentes of music by Mozart. He also investigated olfaction using materials such as coffe or grappa, in order to escape the illusory limits of the painting so to include sensorial experience. In the installations realized toward the end of the 1960s, the artist sets up a dialectic battle between the lightness, instability and temporal nature connected with the fragility of the organic element-like a living parrot- and the heaviness, permanence, artificiality and rigidity of industrial structures, represented by modular surfaces in gray-painted metal. In the same period Kounellis participated in exhibitions that paved the way to Arte Povera, which in turn translated into an authentic form of materialistic expression. An approach that recalls ancient culture, interpreted according to a contemporary spirit, in contrast with the loss of historical and social identity that took place during the postwar period. Combustion began to appear frequently in the artist’s work, in the form of fire and of soot that, since 1967, enlights the transformative and regenerative potential of flames. At the height of the mutation, according to alchemical tradition, we find gold, employed by the artist in multiple ways. In the installation Untitled (Civil Tragedy) 1975, the contrast between the gold leaf that covers a bare wall and the black clothing hanging on a coat rack hanger underlines the dramatic nature of a scene that alludes to a personal and historical crisis. Naturally connected with fire, smoke functions both as a residual of a pictorial process and as proof of the passage of time. The traces of soot on stones, canvases, fragments of classical sculpture and walls that characterize some of his works from 1979 and 1980 indicate a personal “return to painting”, in opposition to the anti-ideological and hedonistic approach of large part of the conservative, new painting production in the 1980s. 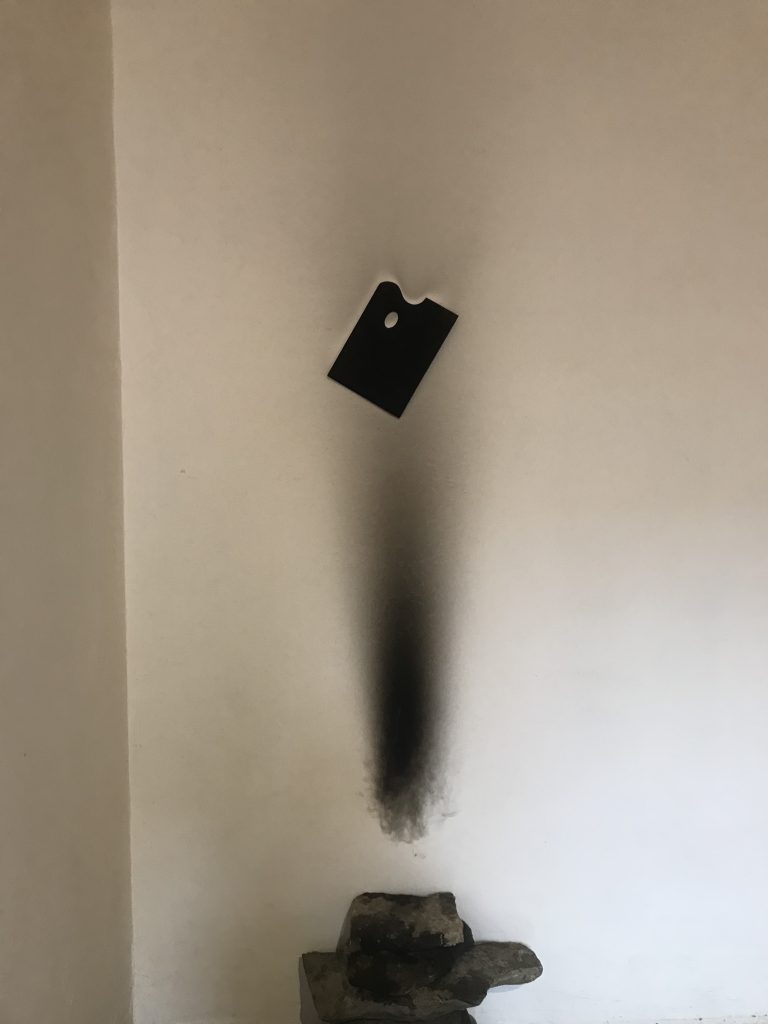 The exhibition narrative also features large-scale interventions in the central rooms of the two main floors of Ca’ Corner. These ensembles comprise shelves or metal constructions containing objects of various origins: coal, ship fragments, coats, chairs, mechanical gears, and an installation made of furniture pieces, first displayed in Palermo in 1993. While on the ground floor two works deal with the relation to interior and historical space: a walled-up door with stones of 1972 and, in the courtyard, a monumental 1992 installation originally conceived for the external facade of a building in Barcelona that is composed of seven metal plates bearing sacks filled with coffee beans. The retrospective is completed, on the ground floor, by a focus on Kounellis’s theater projects and a selection of documents-films, exhibition catalogs, invitations, posters, and archival photographs- that trace his multifaceted career. 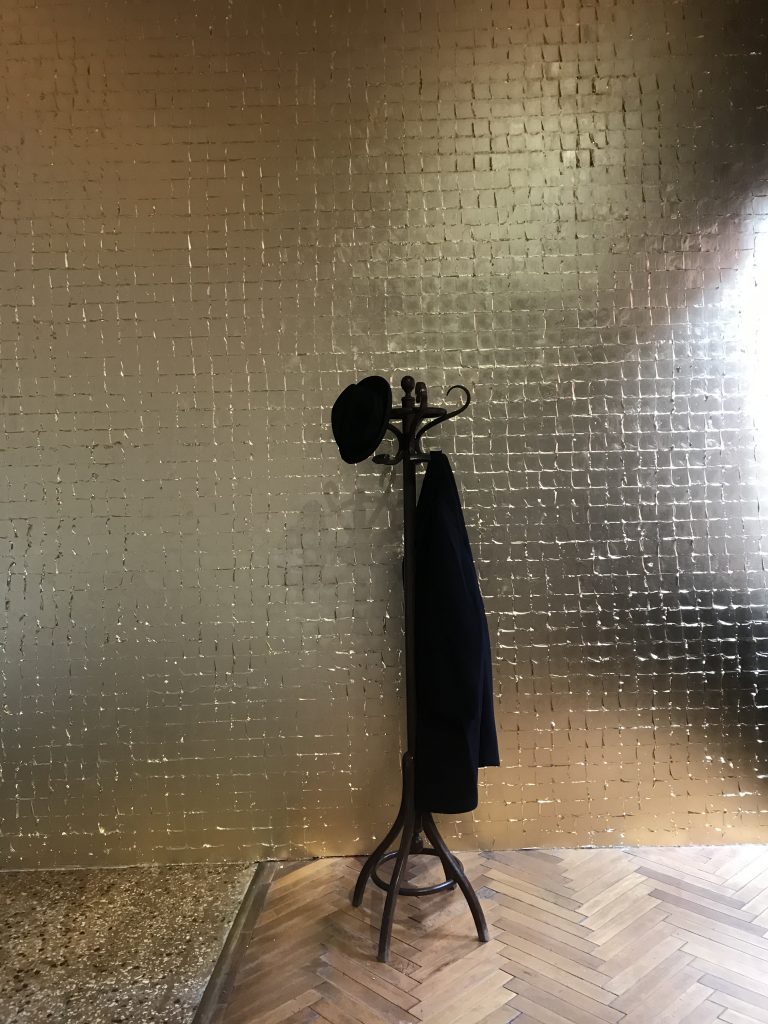 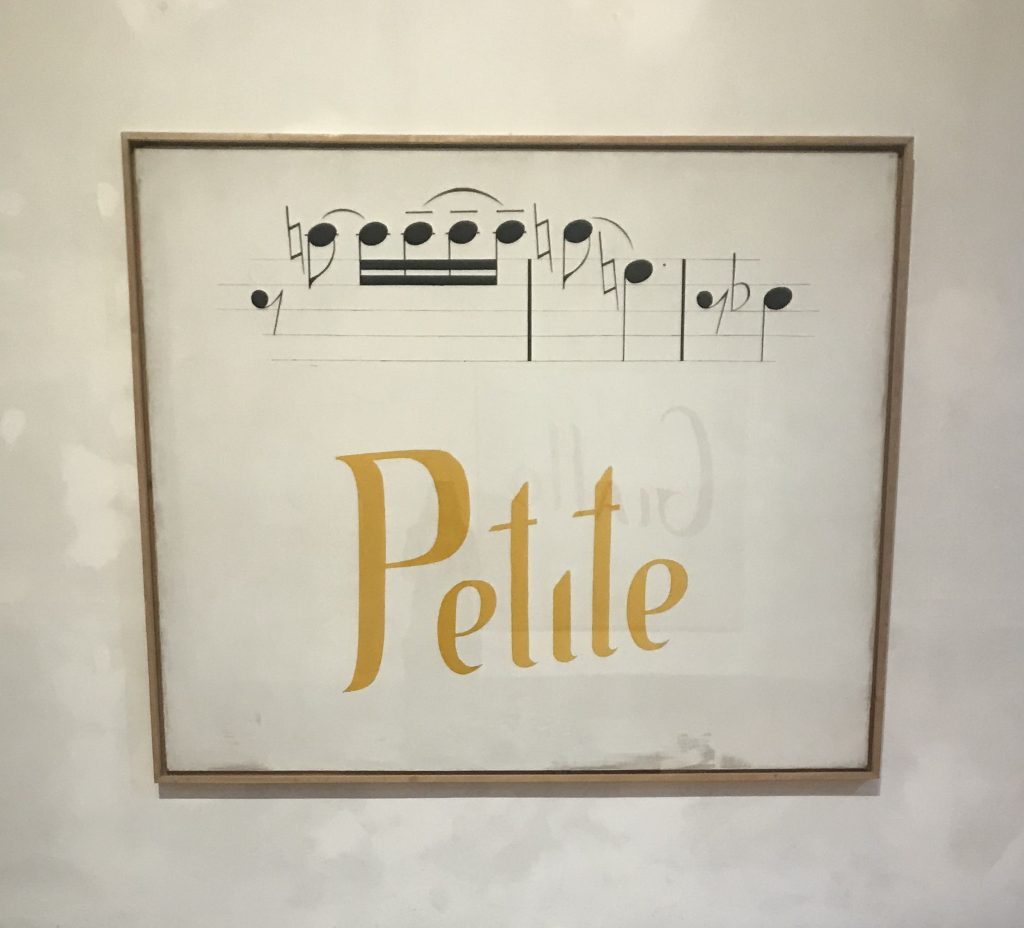 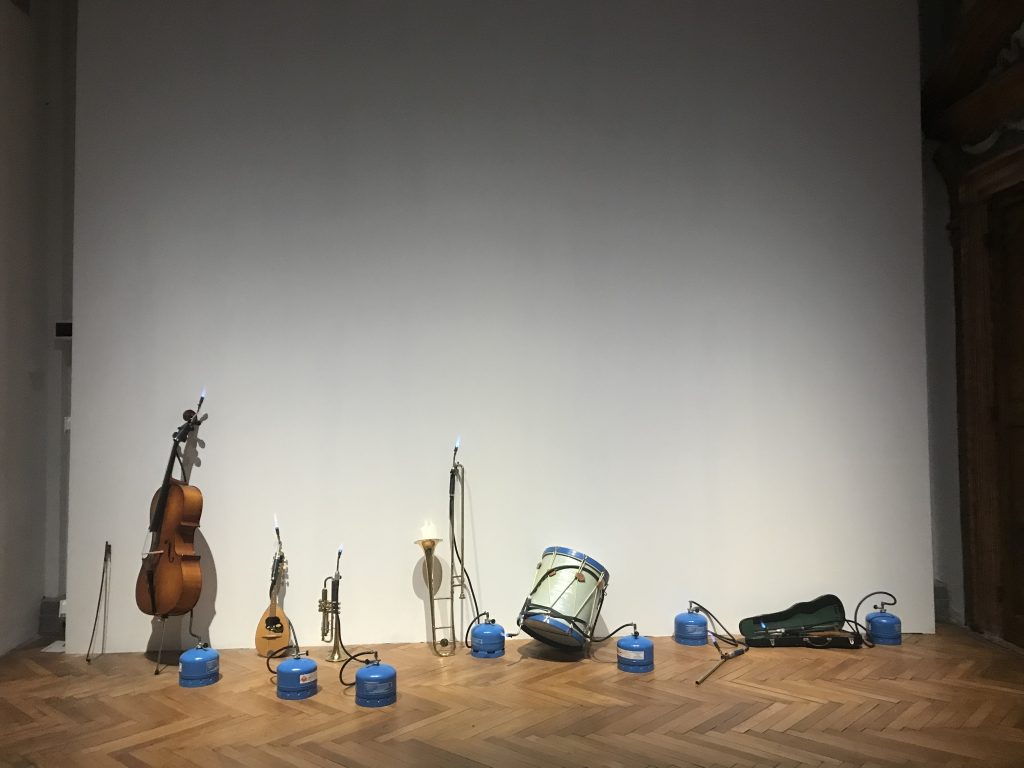 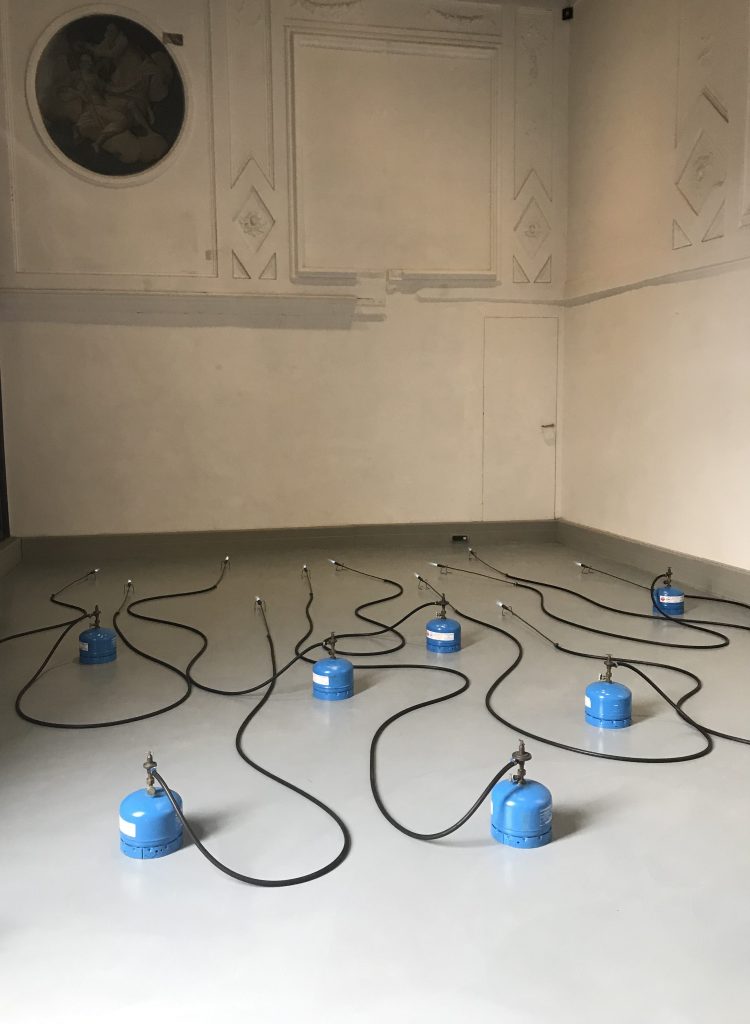 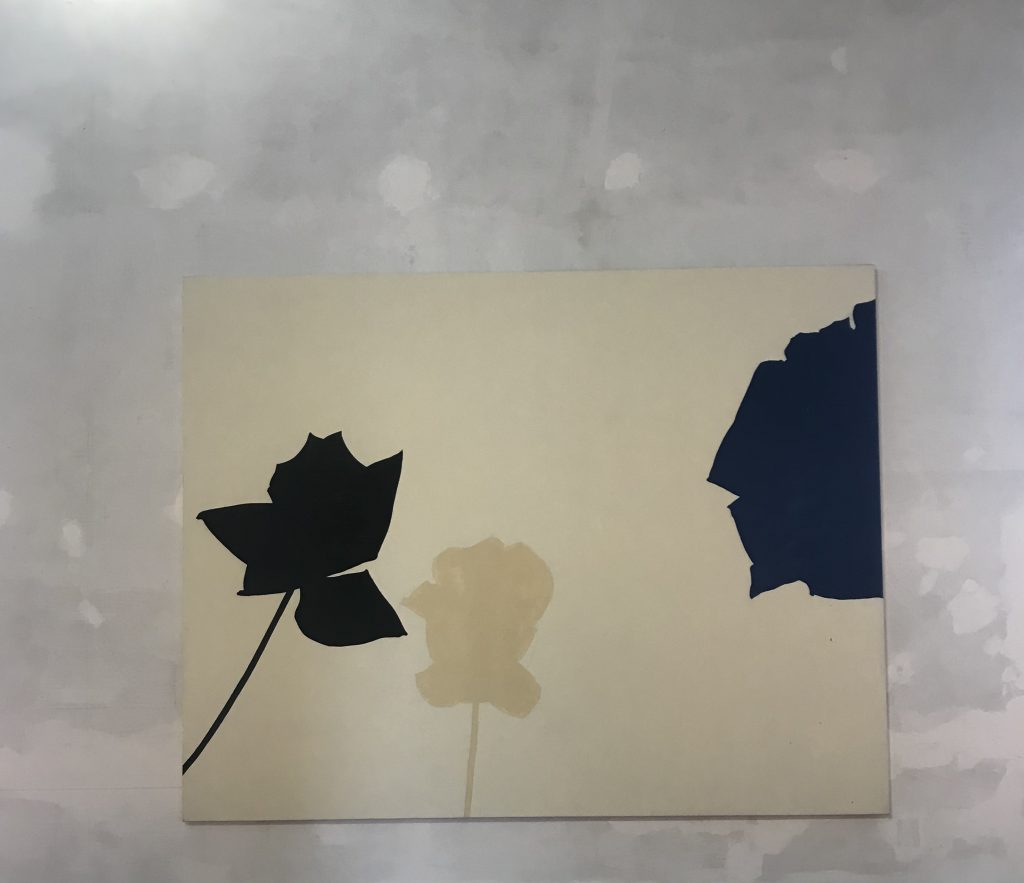 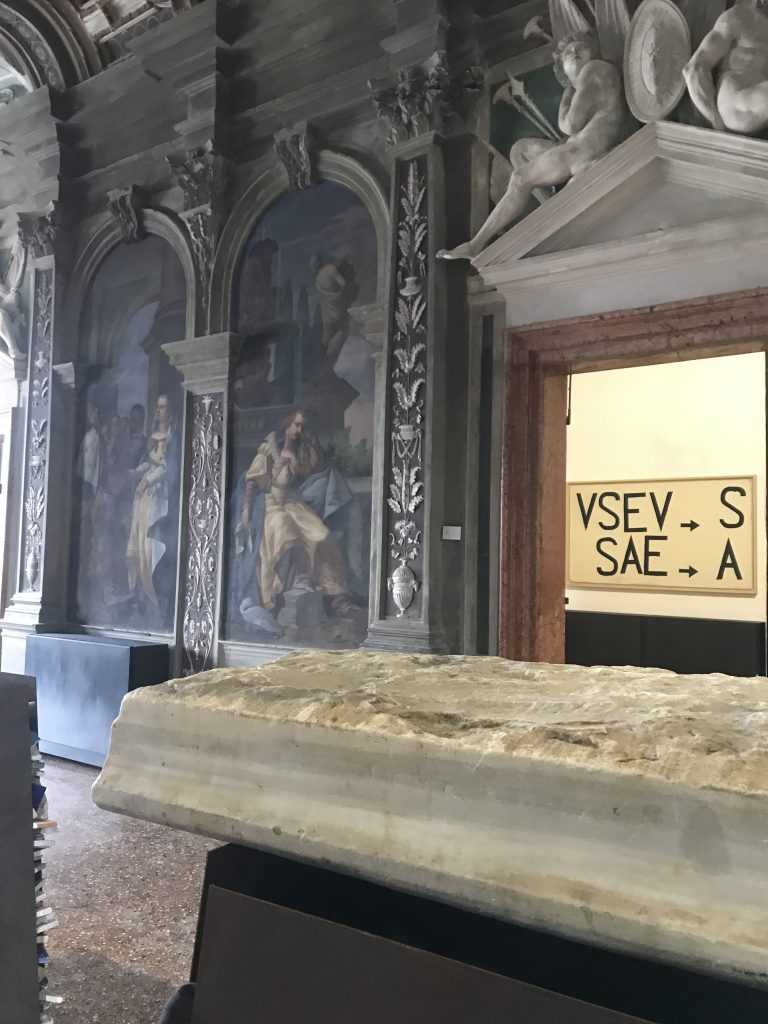