D: Do you see your work as being part of the manifestation of a new aesthetics based in computational language?

G.F.R: In some ways I do, yes. I think the recent ubiquity of the digital screen is reshaping and expanding spatial enquiry and interpretation. There’s an interesting feedback loop between screens and corporeal space. In the early development of this technology, the latter shaped the former, but now, digital interfaces are shaping conceptions of the 3D. I’m investigating this relationship through the expanded field of painting.

D: Space becomes a language, what do you want to communicate?

G.F.R: I want to play with flatness, and find space behind it. To do this I use digital animation, wall installation, collage and painting, but all these media are approached from a painter’s perspective. Painting is inherently linked to flatness, and has played with the concept throughout the history of decoration and art. Tromp-l’oeil was a funny joke in Minoan culture, and ancient Romans combined pattern with pictorial depth in very sophisticated ways. I’m reminded of a beautiful Roman floor mosaic depicting a floor after a big party – strewn with shellfish legs, chicken bones and olive pits. It’s self-aware and a little ironic. There’s an acknowledgment of surface, of pictorial space and the 3D world outside (or in this case, above).  I try to keep this history in mind when considering how digital screens have expanded and built on this 2D tradition. 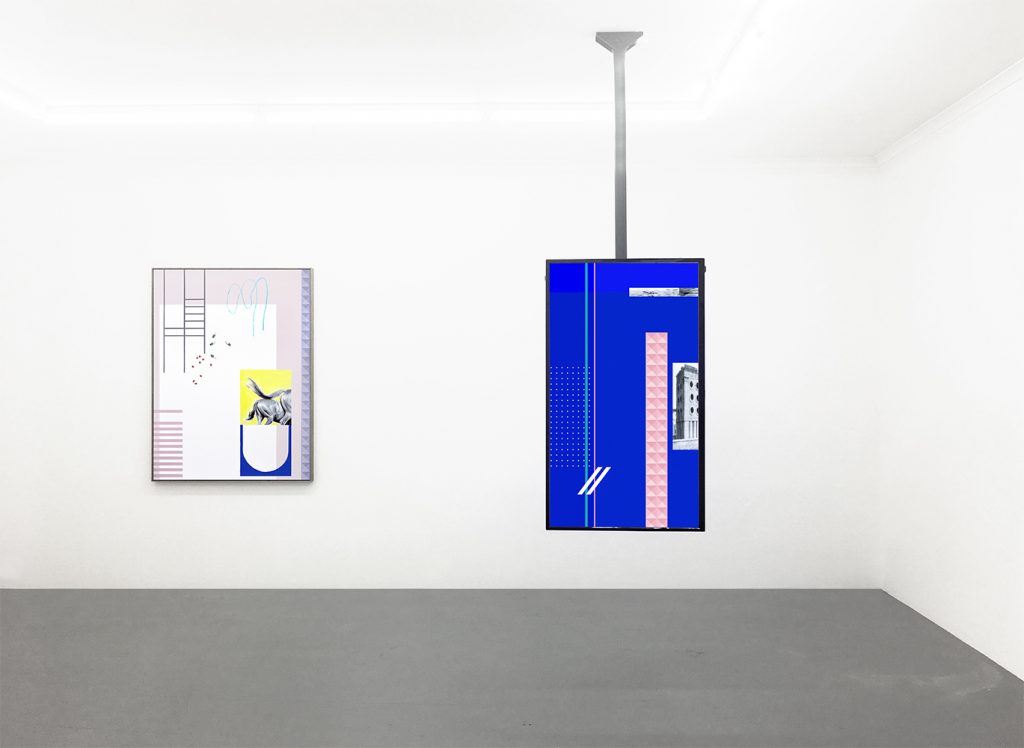 D: In which way does the frame transfer information?

G.F.R: The frame is an interim and a boundary – a point of division and connection. To me, this makes it pretty heavy, conceptually. Different approaches to space can be separated, organised and grouped together. This internal system of logic and order is found everywhere – advertisements, magazines, social media.

D: In which way do you think the way we absorb information and appreciate art will be shifting in the future?

G.F.R: I think the distinction between real and virtual is becoming more ambiguous. Currently, most of the art I really like acknowledges the real and the virtual as a dichotomy, not as a sliding scale. Given enough time and capital, it seems like the two could become very blurry.

D: The new aesthetic is becoming ever more sharable as a concept transforming art into something which is collectively intelligent. Do you agree?

G.F.R: I like the idea of collective intelligence, obviously exemplified by networks, cities, surveillance, etc. But while poetry written by machines can be interesting, profound or funny, it must be bestowed with these characteristics through human interpretation.That is, I consider the machine-as-artist impotent. It’s all just data until a human slaps on a bit of death-anxiety. For me, intentionality matters, and while the collective intelligence of a machine is an incredible tool (for artists as well as everyone else), art remains the product of human ego. 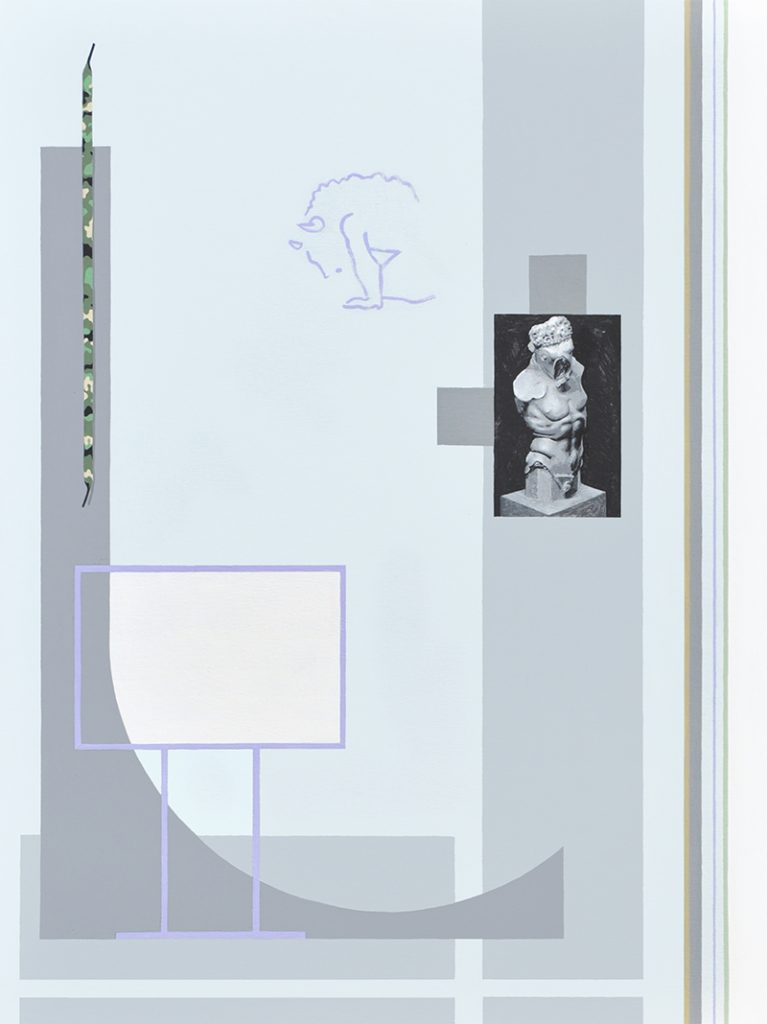 D: In which way do you simplify space into whatever transmits information?

G.F.R: I’m interested in unpacking the translation of the physical and sculptural into the abstract and pictorial. I want to reflect the influence of the digital screen on new conceptions of space, in order to provoke reconsidered relationships between surface and structural intervention, questioning how this affects perception and one’s own sensorial response. To do this, I reference cartesian architecture and museology, which combine x-y axis space with the three-dimensional and photographic. I’m borrowing from formal languages which are dictated by utility, but I’m recombining them intuitively, playfully.

D: In view of this new platform for art do you believe that traditional accounts are viable or do you think the notions of beauty are deductible to mathematical structures or simply incompatible with natural language when assessing new aesthetic objects?

G.F.R: I think cyberspace is a projection of the human world, not a way out of it. The body is a point of reference, an anchor for everything else. I think contemporary artistic experimentation with new technologies use tools like irony and machine-authorship to try to counter this, but for me, the rejection of an idea is fundamentally linked to the original idea itself. 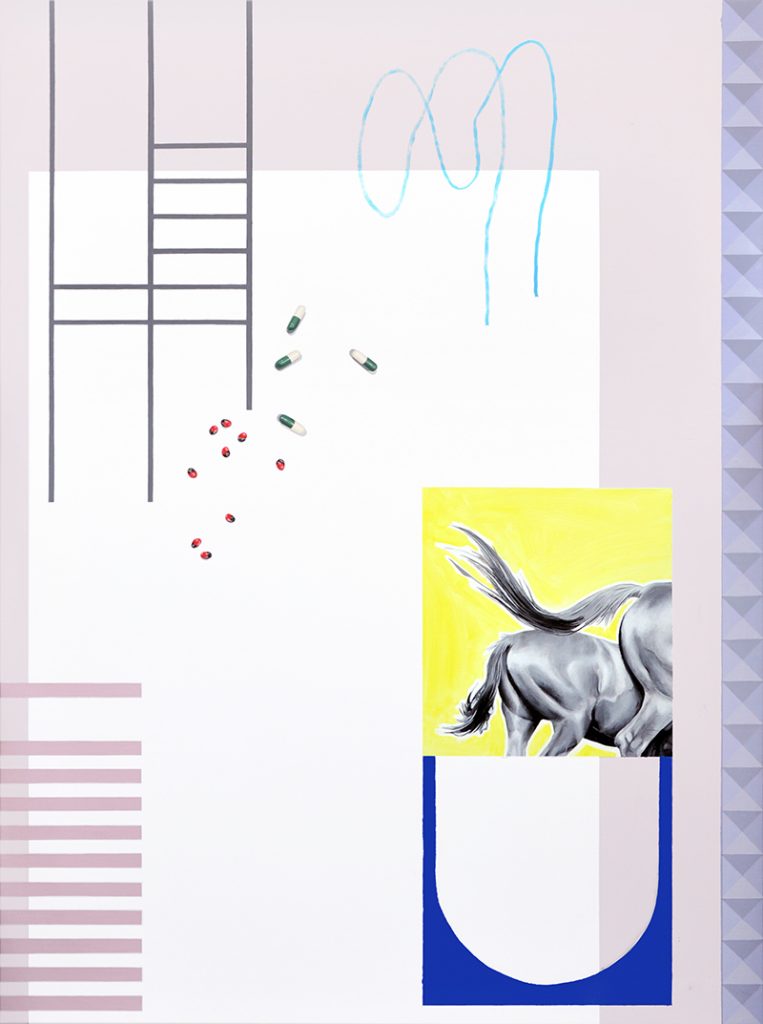 D: How do you think the classical world can come to coexist with the internet ?

G.F.R: It’s a good question. I’m keenly interested in the role of the archive, and the impact that digital technologies have on museology, so I’m drawn into considering the ancient artefact. Over 1200 years, a bronze vase is slowly crushed and develops a patina. Eventually, its rediscovery thrusts it into a new context – it’s documented, put in a book and distributed. The photograph becomes people’s primary experience of the object, and after that, the internet is another abstraction, another step away from object-ness. Through photography and the jpeg, the effects of time are halted. The vase gets as close to immortality as it can.

My practice borrows from the language of archives ( books, online databases, social media, etc), where space is simplified into x-y axis geometry and photography. I’m drawn to the flattening of artefacts and forgotten things. For me, this recontextualisation is parallel to the abstraction of space in paintings and on the digital screen.

D: Beauty, for Kant is a mediating link between nature and freedom in a transitory sense, meaning that it serves as a subjective assertion of the free play of our rational capacities. Do you think post-internet art resists the notion that it must be lacking purpose in order to be universally posited as beautiful ?

G.F.R: Actually, I think post-internet art often elicits beauty and free-play by collaging, re-purposing and appropriating, so that the final result still triggers (in the viewer) the same state that Kant describes. Repurposing things, or re-contextualising things that have no purpose (like glitches) and finding beauty in them is attributing purposiveness to them, in some sense. I suspect this is in still in accordance with how Kant defines the artistic process.

D: Do you believe the internet has passed into the realm of the banal or dare you more opt a for a techno-optimist internet of ceaseless potential and reinvention?

G.F.R: I think the internet, and more broadly, technologies that incorporate network and social features have huge untapped potential. Art becomes something less structured, less hierarchical, and its consumption continues to complicate. Ultimately, this categorisation may evolve into something with totally ambiguous boundaries and objectives. Maybe we’ll need some totally new words. 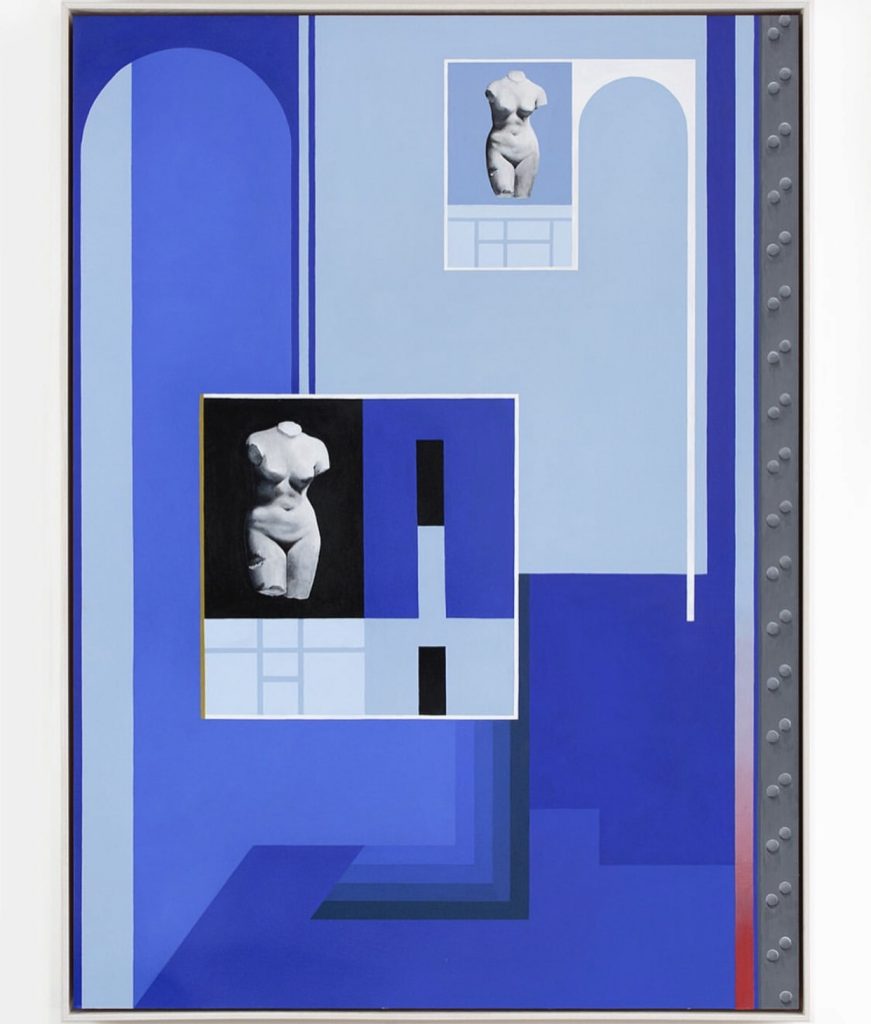 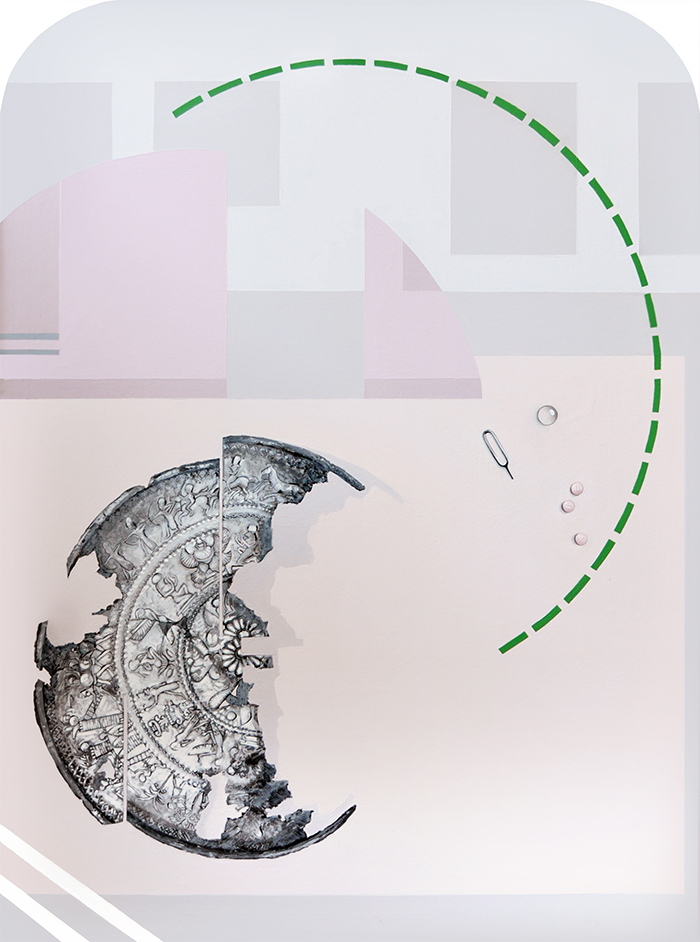 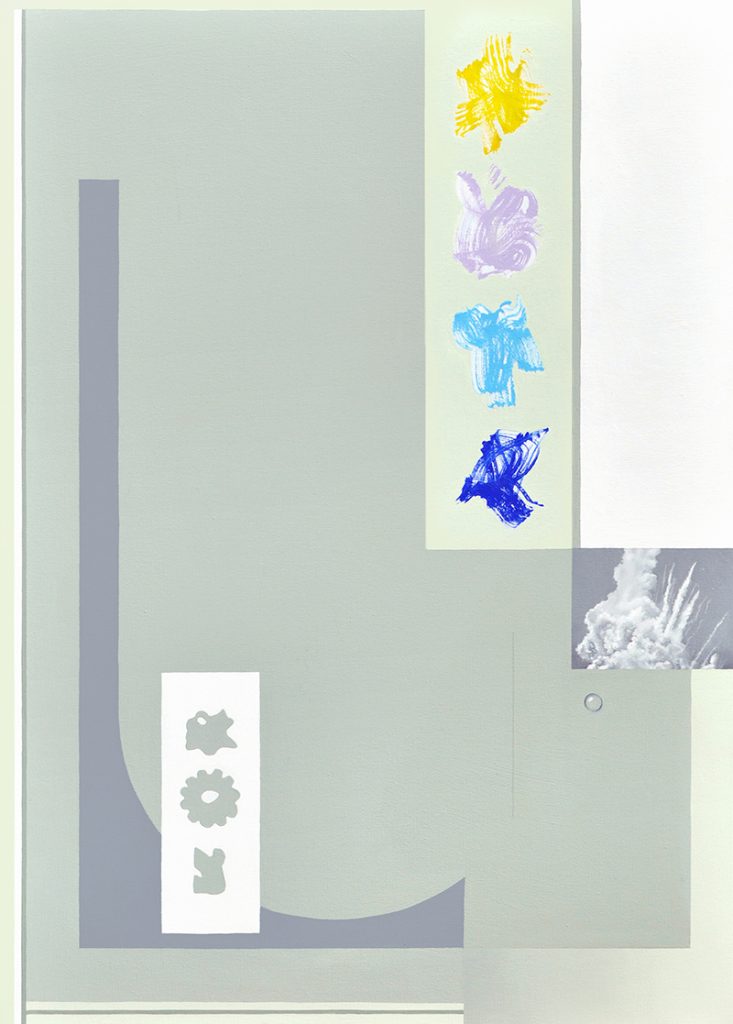 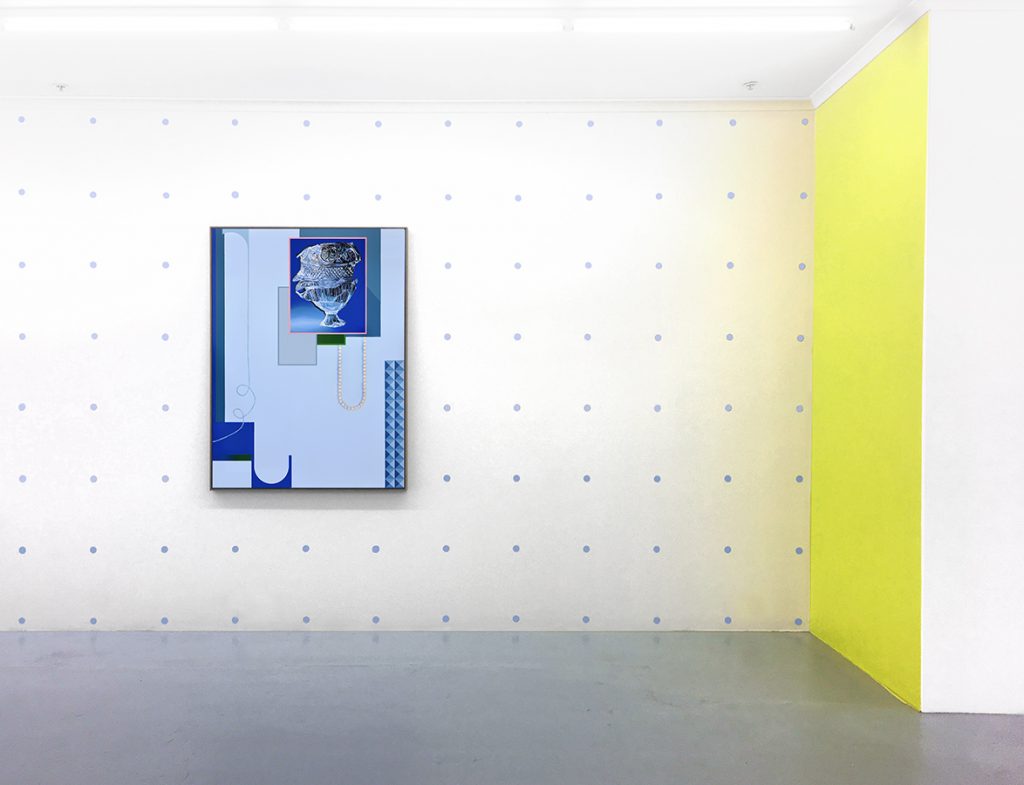 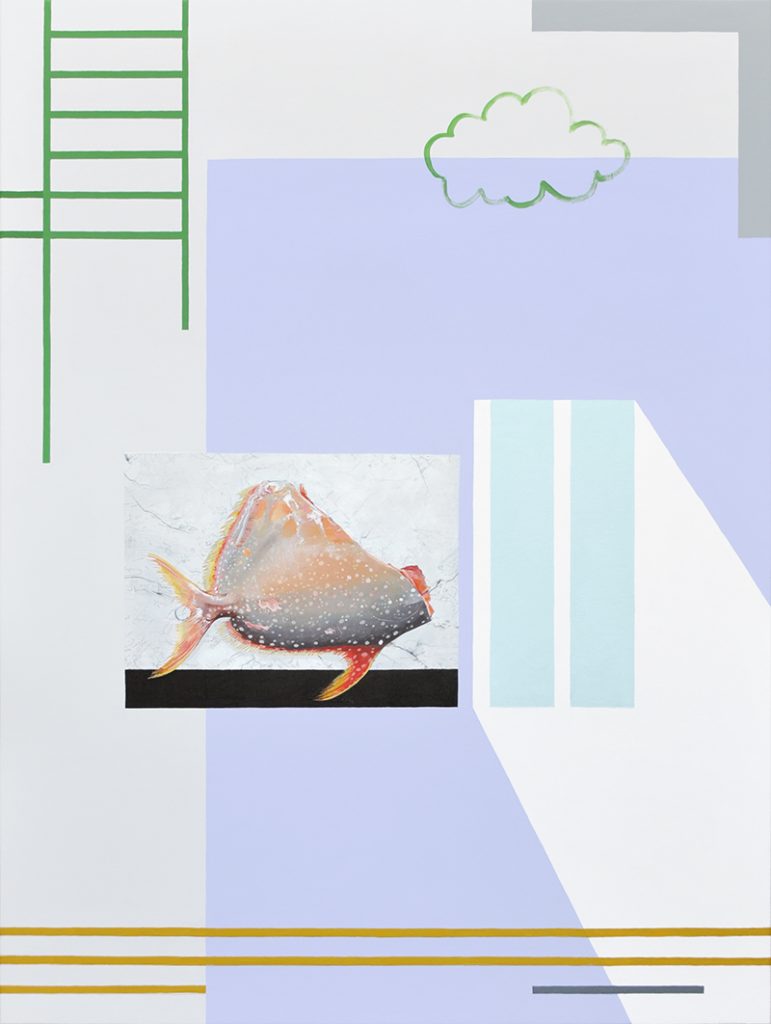