The pure essence of great style and of ballet marries the disruptive energy of rock and roll in the same evening. The show debuted in January 1972  in Marseilles. The band, in front of a delirious crowd, for the first time arrived on stage with a dance company. With an elevating stage, among flames and psychedelic lights, the band played live contrasting the choreographic created on their songs by the great Roland Petite. Academic movements were adapted to the modern. Points, half points, pirouette, in harmony with the notes of rock n’ roll, with sounds of synthesizers and the electroacoustic music filling the ether.

The creation of the  “Pink Floyd Ballet” was a suggestion of Valentine, young daughter of Petite that shared her passion for pink Floyd with her father and brought him to create choreography for twelve songs from various albums. Structured in eight frames the show includes Obscured by clouds, Meddle, The dark side of the moon and The Wall. It is a play of laser lights and smoke caressing the stage and hypnotizing the audience. The sound of the wind links one song to another, the dance goes fast intertwining solos and choral scenes full of force and vitality with compact and fluid masses, frontal sides and group compositions. The architecture of the composition shows a predilection towards euphony of the body and a continuous alternation and change with movements of great compositor inventive. The ballet is enthralling, it flows like a cinematographic film, contributing factor is the notoriety of the songs like The great gig in the sky. White is the color that dominates the neoclassical style of the performance. It is a choreography with a beautiful lexicon that expresses the purest form of rock n’ roll with a classical technique of explosive individual virtuosity . The psychedelic notes are mesmerizing, symmetry of the forms produce a highly pleasurable aesthetic that transports the audience into a transcendental space. 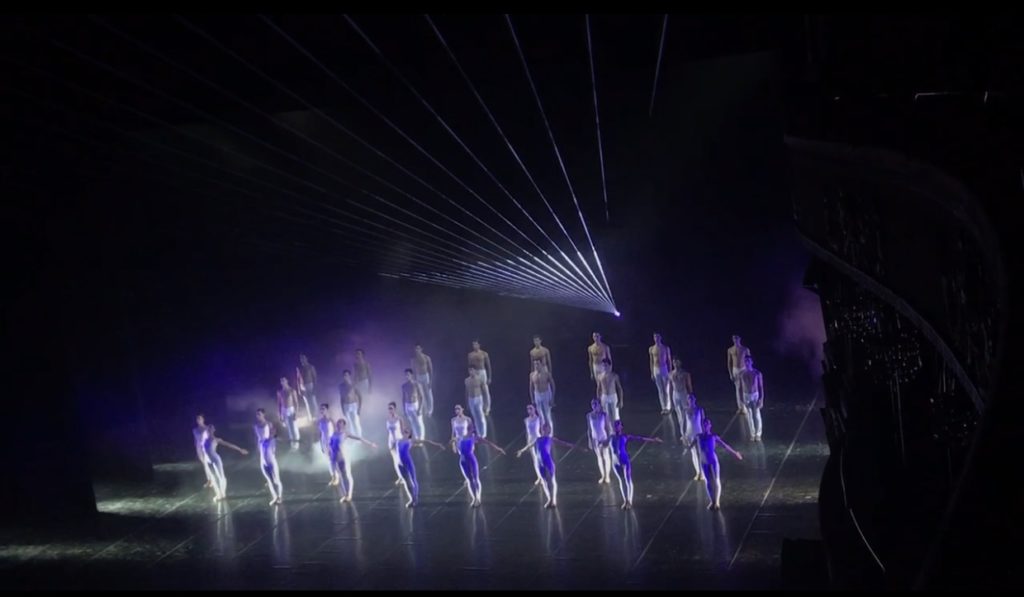