The international group exhibition Radical Gaming presents a selection of artists who investigate the structures, technologies and aesthetics of a global gaming industry. Their works are characterised by a particularly unconventional approach to employing the immersion and interaction inherent to video games, whose common narratives and stereotypes they subversively undermine. This new generation of artists use contemporary game programming technologies to create virtual and augmented reality experiences, immersive environments, interactive stories and multimedia installations. By appropriating the medium for their artistic practice, they create alternative perspectives on identity construction, gender issues and social change. Their refusal to abide by the commercial and recreational logic of video games, sets the scene for their progressive, uncompromising, and thought-provoking works. 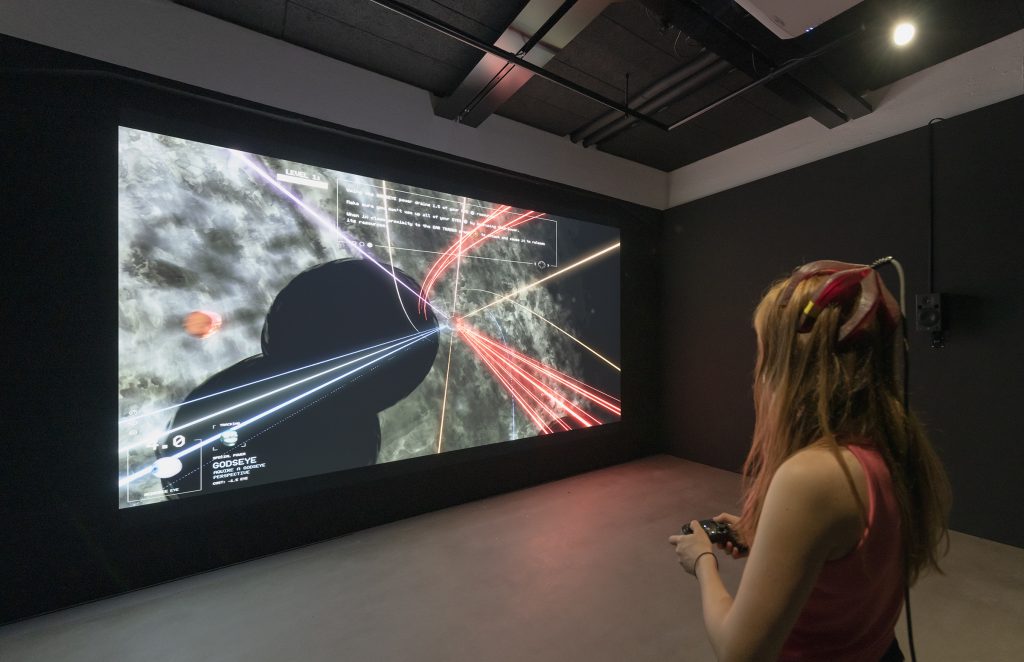 Once considered no more than adolescent entertainment, video games have evolved to play a major role in the world’s cultural production and engage all ages and social classes. While the commercial production of video games has multiplied, so has the development of indie games, which offer innovative approaches both in terms of content and formal design. Artists have also been experimenting with the medium, and what is often described as ‘Game art’ has flourished for several decades now. Still today, many artists continue to produce works that make use of the

mechanics of video games, with a peculiar artistic quality that makes them unique compared to both conventional and alternative video games. 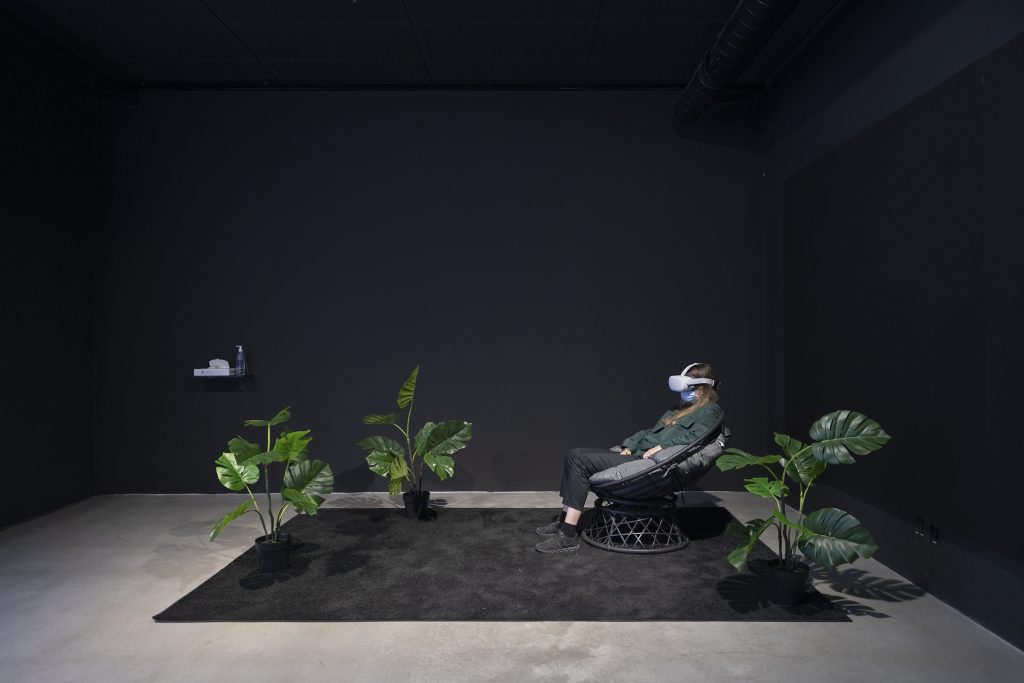 The exhibition Radical Gaming presents recent works created by artists who employ video game media to point out a new trend that diverges as much from pioneer ‘Game art’ as it does from conventional video games. What distinguishes artists who involve video game practices today? Undoubtedly, the works assembled here are characterised by their intentional and reflective use of the interactivity and immersion inherent to video games. Their artists invite viewers to take an active part in the work’s actualisation, as opposed to other ‘Game art’ where the public experience the artists’ audio-visual installations and performances. Interactivity is not only a playful component but is conceived as an element that contributes to conveying the artist’s idea. These works certainly differ from traditional video games in their desire to provoke a speculative reflection rather than simply provide entertainment, as their themes often involve political and ecological issues and very often question stereotypes linked to social or gender affiliations. These content-related ambitions come close to those of indie video games, however, the exhibition’s art works are distinguished by a third feature: They are the result of the assimilation of recent artistic strategies, and above all influenced by the so-called post-digital aesthetics of the second decade of the 21st century. The artists from this new generation of ‘Game art’ not only make formal choices regarding the virtual universe of their works, but also regarding their contextual installation in the exhibition space. The experience of these digital works often permeates real space to accompany the viewer’s transition between the real and the virtual. Contrary to the use of conventional formal solutions that marked the beginnings of digital art, the artists of this new generation are able to develop a specific and personal language that remains consistent with the virtual world they have created. 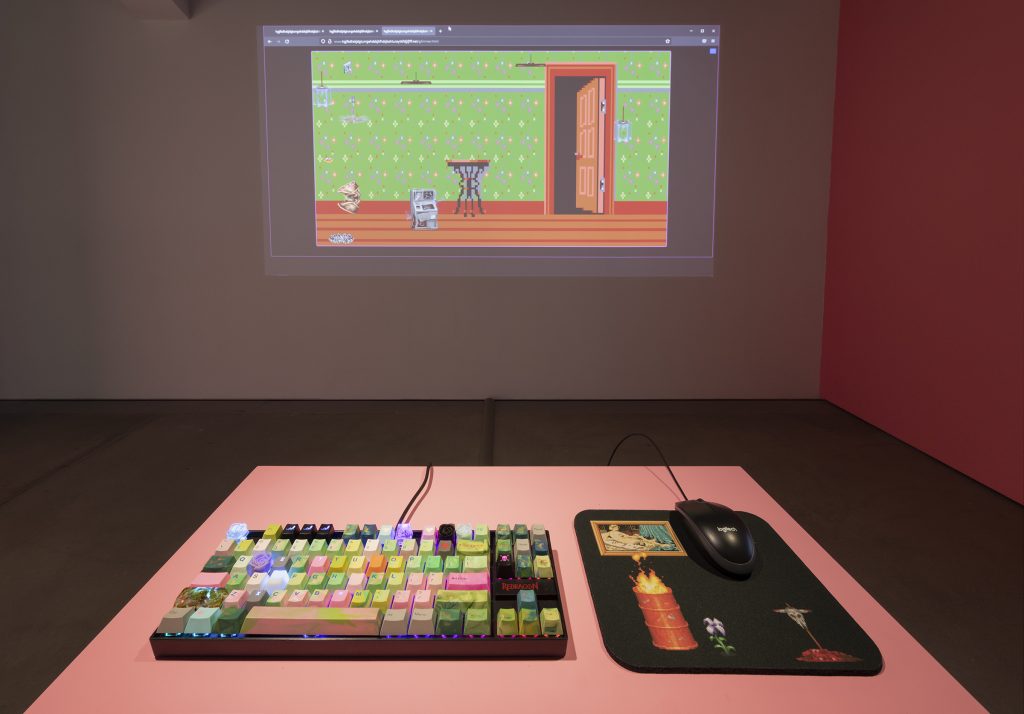 While all the international artists participating in the exhibition Radical Gaming have today’s global digital culture in common, they represent a striking variety of cultural backgrounds. Many voices still consider gaming to be a purely recreational and escapist activity. However, the exhibition bears witness to the existence of a gaming production that thwarts this prejudice, as its artists counter both traditional narratives and aesthetic forms by inviting us to immerse ourselves in unusual, provocative and always compelling experiences.

The exhibition will be accompanied by the publication of a comprehensive catalogue that documents the works on view and features current scientific contributions, including an essay on Game art by art historian Stefan Schwingeler, an essay on emotional aspects of the user experience by cognitive psychologist Elisa Mekler, and a text on game mechanics and immersion by designers and researchers Beat Suter and René Bauer. An extensive programme of events and educational activities is also planned. 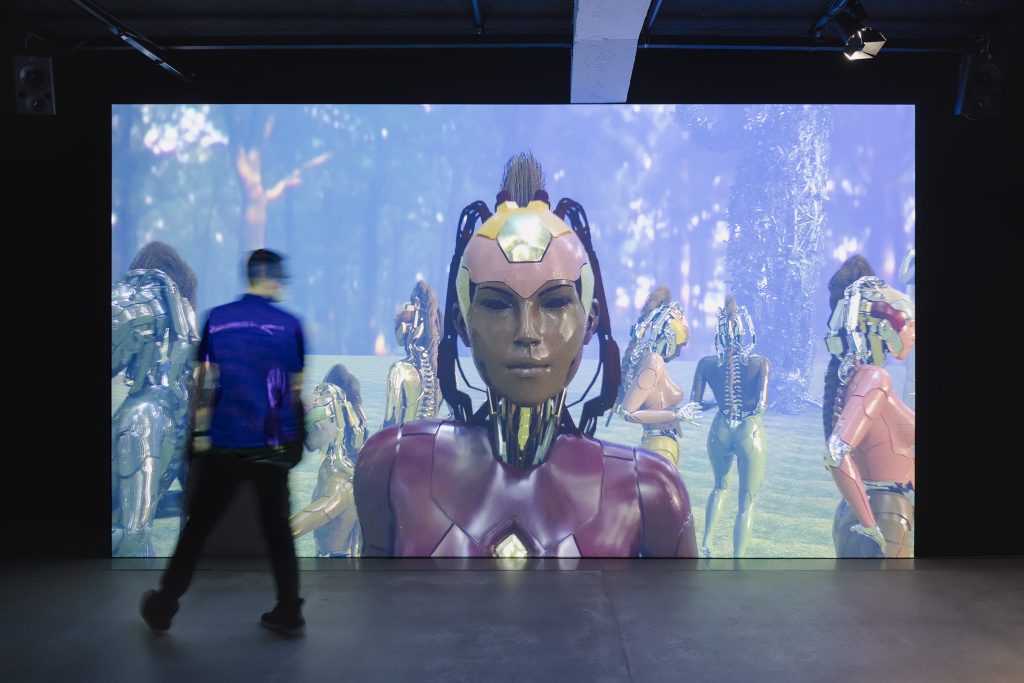 British artist Danielle Brathwaite-Shirley creates gaming experiences that are also manifestos for the empowerment of black trans communities. As in Resurrection Land (2020) their work is imbued with an aesthetic that intentionally introduces animist mysticism to digital technology.

The German and British collective Keiken elaborates futuristic universes to reflect on social and ecological issues, close to a critical post-humanist discourse, which they transpose into their multimedia, interactive installations. Their recent work from the Metaverse series (2021) immerses players in a digitised future, complete with retrievable and downloadable customised tokens.

Nøtel (2018) is a fully automated luxury hotel created as a virtual environment by British artist Lawrence Lek. Infused with enhanced preventive security, with an encrypted network and protective drones integrated into its architecture, the work reflects on questions related to artificial intelligence and automation of labour.

Russian artist Mikhail Maksimov is an artist and filmmaker who uses the language and mechanics of video games to tell stories that question stereotypes linked to our cultural, political and religious heritage.

Cassie McQuater appropriates certain genres typical of video games, upsetting their logic to develop a discourse that questions the roles attributed to genders and the representation of the female body in particular. With Black Room (2017–ongoing) the American artist has created her personal take on the classic dungeon crawler.

Indian artist Sahej Rahal works in a variety of media to bring to life a mythology collected from a wide variety of sources, ranging from Hinduism to science fiction. His games, such as Antraal (2019–20), feature creatures governed by an enigmatic artificial intelligence and with which players can interact through sound.

American artist Nicole Ruggiero creates virtual and augmented reality universes to explore issues of sexuality, emotions and the impact of digital technologies and online culture on our collective behaviour. How The Internet Changed My Life (2021) features Internet celebrities such as Mike Diva, Franziska Von Guten, Molly Soda and Steffen Yoshiki.

We Are In Hell When We Hurt Each Other (2020) by American artist Jacolby Satterwhite depicts the virtual world of a post-pandemic environment where black female CGI characters, modelled and transcribed through digital bodysuits, use ritual and movement as tools of resistance.

Darkgame (2014–ongoing) is an immersive game produced by Israeli artist Eddo Stern in which the user is compelled to navigate a hostile virtual environment through non-visual interactions.

Pastoral (2019) by Greek artist Theo Triantafyllidis invites the player to embody the avatar of an incredibly muscular orc strolling through the idyllic landscape of cornfields glowing in the sun. The scene is strangely reminiscent of familiar fantasy scenarios but void of the conflicts they usually come with.

The games of the Venezuelan artist Miyö Van Stenis explore forms of power in contemporary society while confronting issues of war and sexuality determined by the ideological structure of patriarchal supremacy.

The action game The Great Adventure of Material World (2019) produced by Chinese artist Lu Yang allows the player to explore a world populated with various iconic creatures and engage in fights that are ultimately an expression of all sorts of emotions. 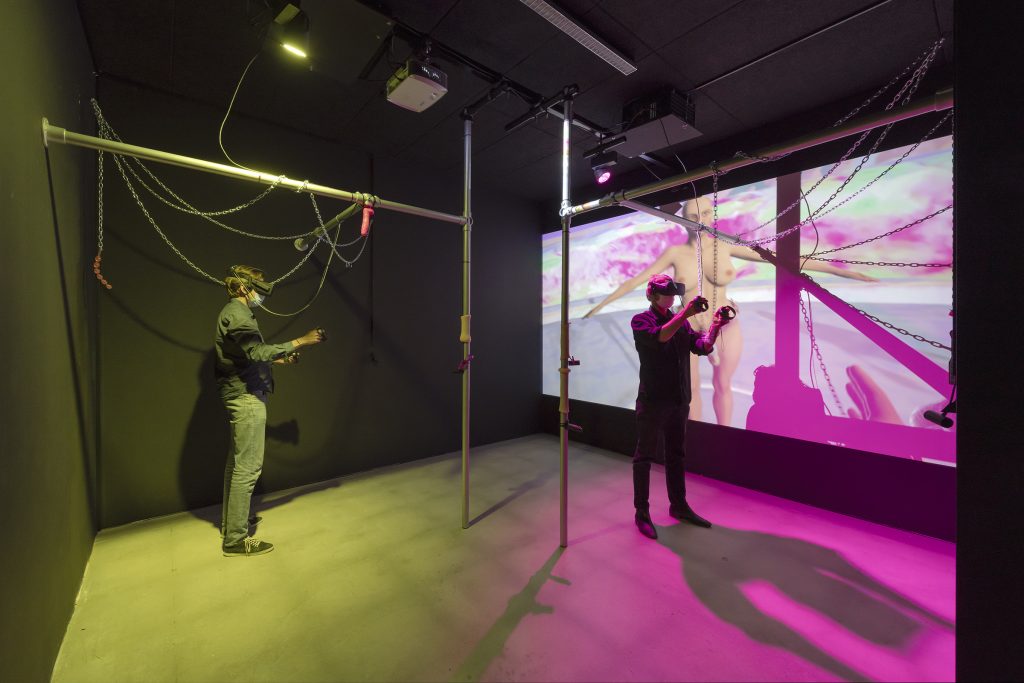 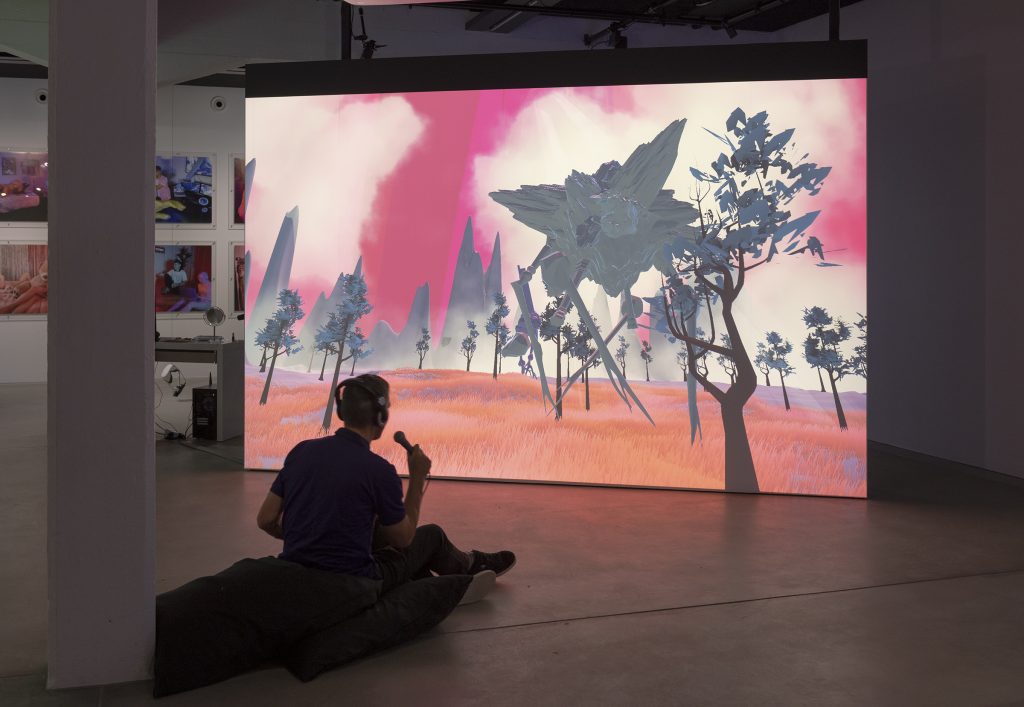 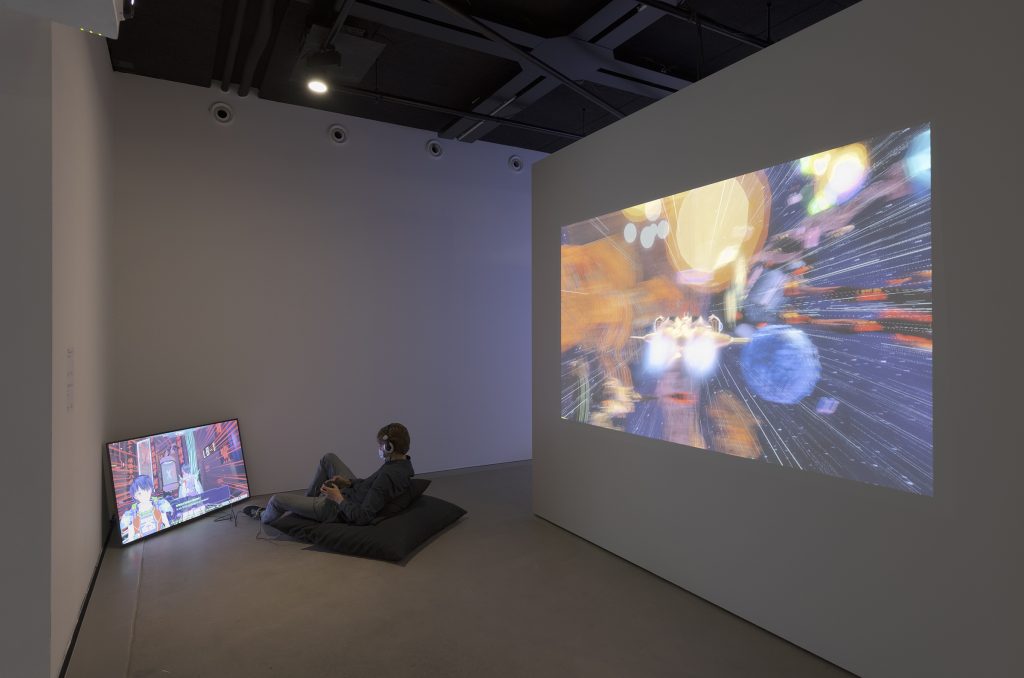 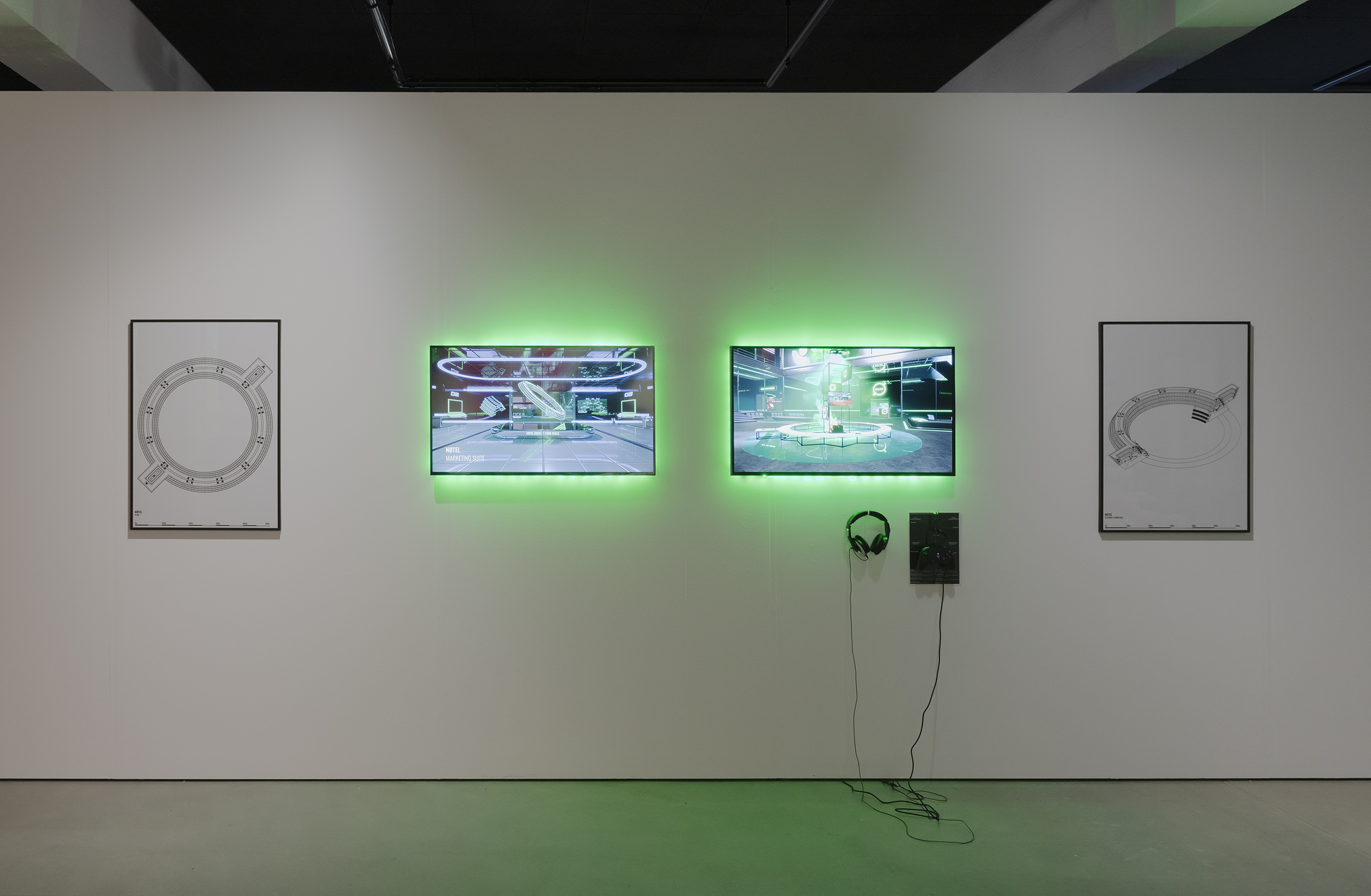 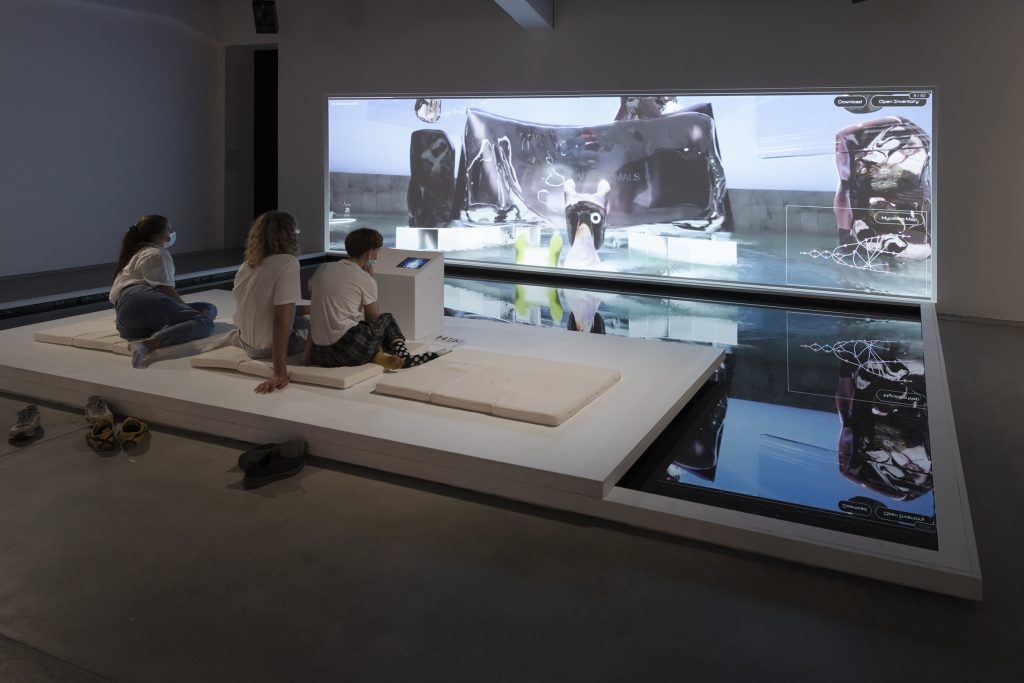 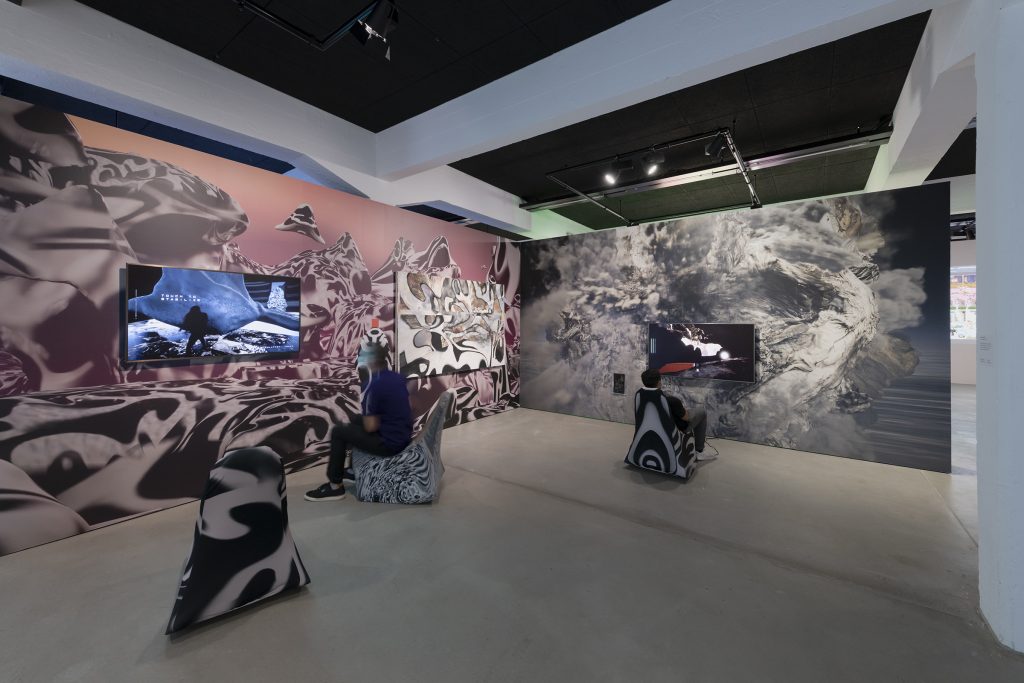