You’re not famous until your Insta followers go from 0’s to K’s.”

This was part of a conversation Kiri and I fittingly overheard during one of our few meetings in the ‘physical’ world.  This conversation was between two teens trying to curate a ‘found’ scene, something cool within their physical surrounds to ‘gram.’

The condition by which the ‘real’ and ‘fiction’ seamlessly merge is not a new thought. From Jean Baudrillard to a multitude of Hollywood blockbusters, variations of hyperreality have constantly been re-appropriated and re-applied to the technologies and mediums of the contemporary context. Therefore, while the term hyperreality is not a new phenomenon nor even a phenomenon any longer, its banality is. This banality has allowed for its seriousness to wear off and remain relatively unquestioned to the point prior of its conception. This proves particularly prominent within the context and users of Instagram and various other social media platforms.

On the 16th of February 2012, artist, Kiri-Una Brito Meumann posted her first Instagram image, unconsciously subscribing to this hyperreality. 940 posts later, she joined the elusive K’s club becoming ‘another’ physical identity of prominent social media status. However, Kiri’s seemingly cliche and perpetual feed of engagement with, and contribution to Instagram is the work of a critical artist. 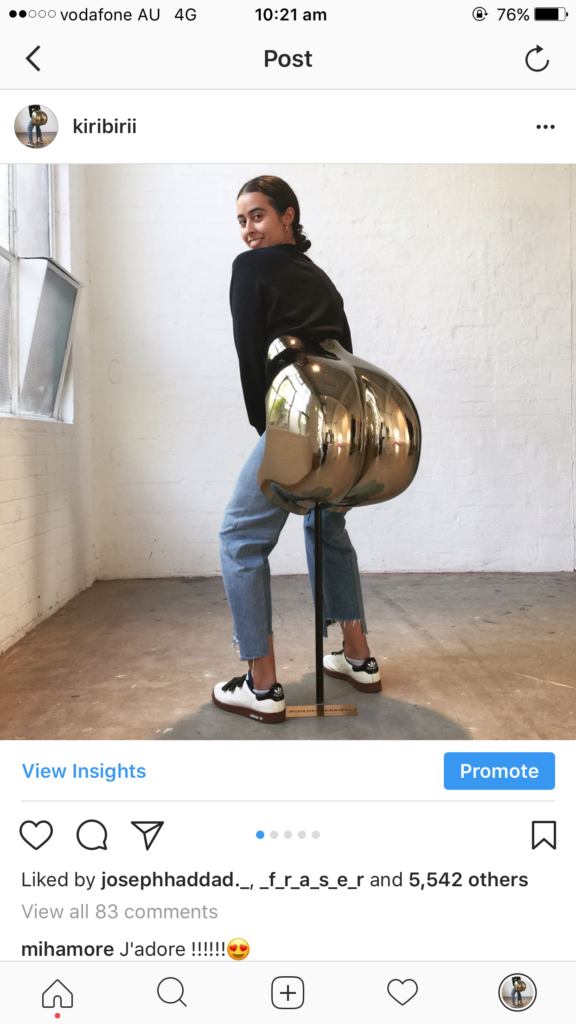 At 22, the Melbourne based (IRL) artist has sold work to rapper A$AP Rocky, created the hashtag #GoldenDerriere and posted hundreds of selfies. By doing so, Kiri has contributed significantly to the formation and perception of the contemporary hyperreal identity – all facilitated via the interface of Instagram. While this was not the original intention of Kiri’s participation in/with social media, she progressively became interested in its facilitative a/effects, particularly of that between the slippery labels of identity, lifestyle and the image, and their role in developing misconceptions between ‘real life’ and ‘fictional lifestyle.’ @kiribirii is progressively testing these waters and blurring these boundaries as a partial work of art and memoire.

Here, Kiri and I have put together a set of partial conversational notes in which their publication would not be possible without social media or Kiri’s engagement with it. These words were conceived, compiled and distributed almost entirely via DM (direct message) on Instagram. They bring together a few of the many threads of thought prompted by, discussed on and distributed via social media – that in turn, generate Kiri’s ideas for artworks, networks of engagement and avenues for experimentation.

@Kiribirii: “Originally, I was drawn to the aesthetic appeal of Instagram, or so I thought. I liked that Instagram was predominantly image based. I would find myself in loops and holes scrolling through feed after feed of inspirational lifestyle images and would often post, share and regram similar content. For three or four years I wouldn’t say I critically engaged with Instagram until I realised there was a deeper culture these images were facilitating… kind of beyond the image.”

@url.cv: “I guess that within the image is the ‘real’ image – the subjects, objects and context that make up the material substance – but, there is also the ‘imagined’ image, the signs, symbols and connotations of those things. These may allude to embodied themes, or this deeper culture you mentioned. Some of this might be explicit, others, subtle hints – maybe these echoe suggestive ideas of a romanticized ‘real’ identity and lifestyle within the image? 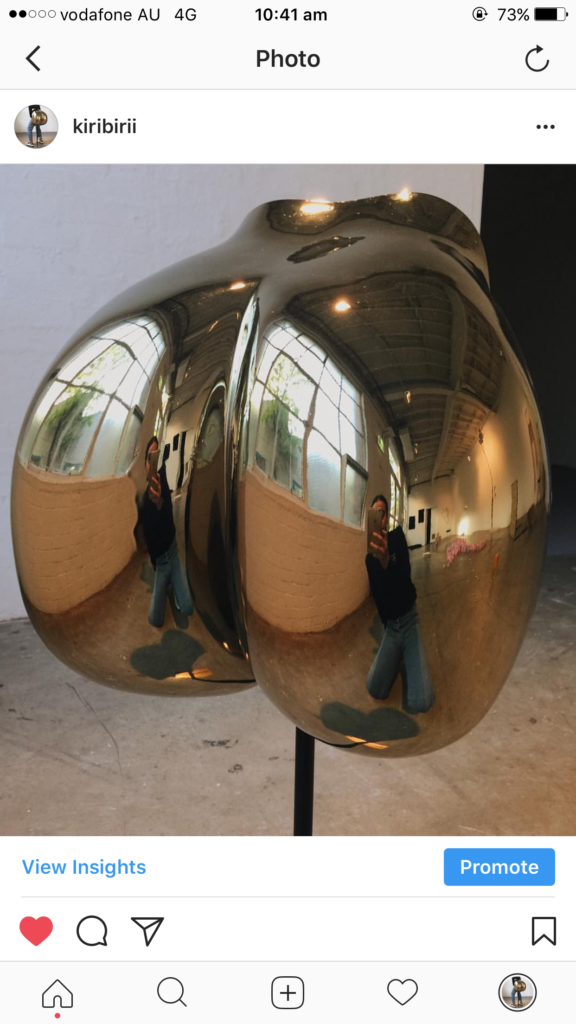 @Kiribirii: “Yes, totally! I quickly became interested in how the image can both romanticize and misconceive ‘real life’ into ‘fictional lifestyle’ and vice versa. This really made me think about what I was really looking at and what I was posting and how both contribute to / influence a progressively evolving culture.”

Between the Digital and Physical

@url.cv: “Do you think this evolving culture only affects the ‘digital’ space of Instagram or the physical environment too?”

@Kiribirii: “I think it affects both for sure. I think that the people and users of both worlds constantly try to take things from their respective environment and move them into the other all the time. I am really interested in this but I am more interested in their blurring. This has really become the main focus of my art practice and general observations of the world around me.” 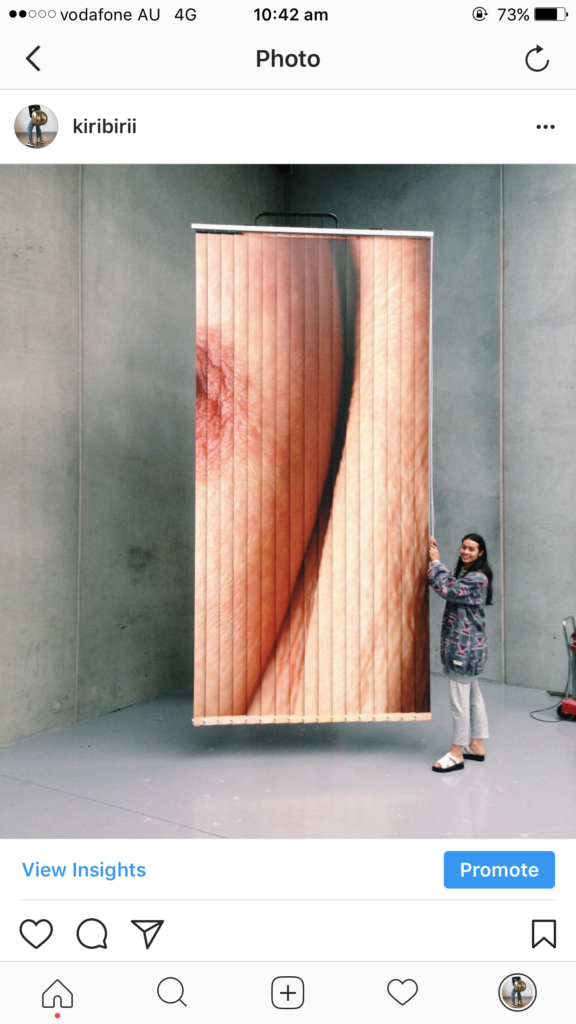 @url.cv: “We spoke of this blurring while you were developing your piece #GoldenDerriere (physical bronze cast of Kim Kardashian’s butt with complimentary hashtag.) I think your exploration of the partiality of user, event and location is very Instagram. To take a symbolic physical fragment of a prominent user / identity of Instagram [Kim Kardashian] and subject [her butt] and abstractly render it a partial figure is really interesting. But, casting it and making it shiny (brass) gives it both a material importance and perfect ‘selfie’ opportunity. Here, people in its physical presence with an active Instagram account begin its transferral into digital space via the #goldenderriere.  This is the same digital space (social media) from where the partial figure’s origin of user and subject thrive. Do you think Instagram plays a large role in the reconfiguration of perception of the physical world?

@Kiribirii: “I guess I see Instagram as this blurred meeting point between the physicalities of the material world and the reconfiguration of their perception / representation in the digital world. I really wanted #goldenderriere to literally superimpose people into the work via the back side of the cast and via its reflective surface…taking the photograph and posting it connects the dots between user, experience and location.”

Between the person and user 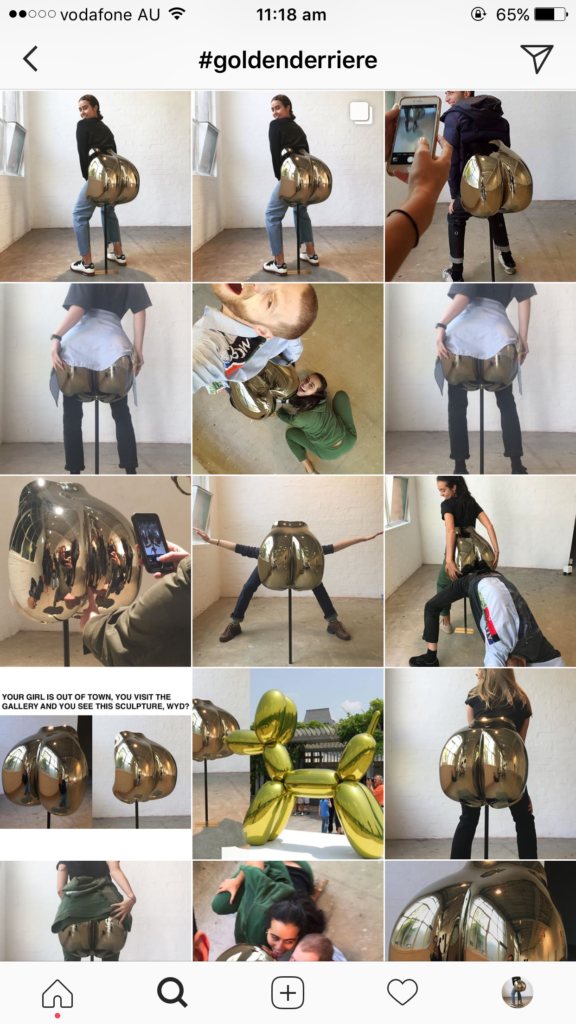 @url.cv: “I like how you distinguished between the term person when they are in the physical world and user when they are in the digital context of Instagram. I think this does a lot for the interplay between these ideas of the real, the fictional and the hyper real. I think @kiribirii is progressively testing these waters and blurring these boundaries as a partial work of art, memoire and exploration into the shifting perceptions and representations of contemporary culture, identity and lifestyle. Where do you see your ‘image(s)’ going?”

@Kiribirii: “I am not really sure where it is all going! – But, I do think the experience of use and engagement with social media has opened my eyes to these shifting perceptions and representations of identity and culture. I hope to continue to explore these conditions as they evolve.” 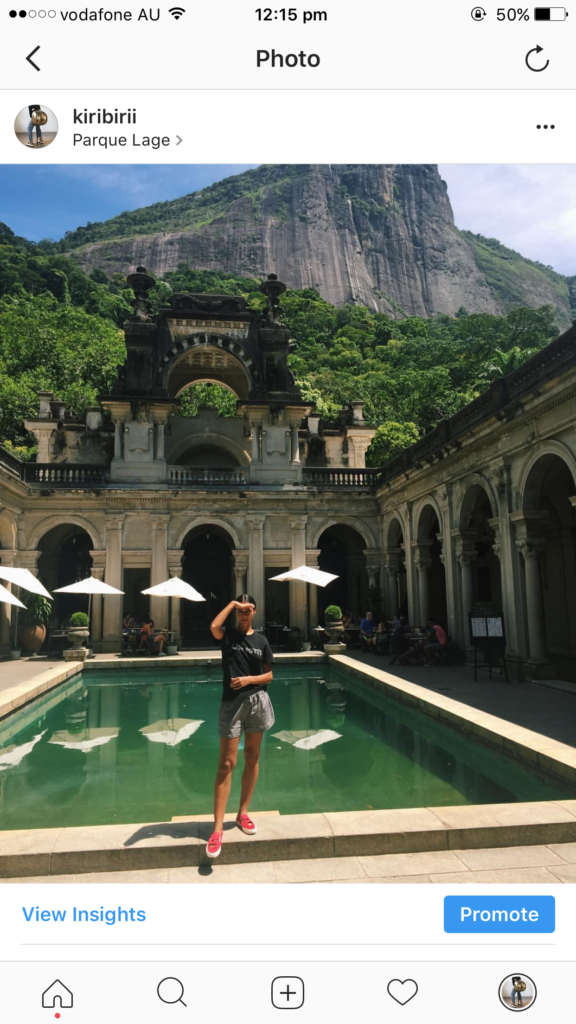 @url.cv is the instagram account of Colby Vexler, a Melbourne based Architect and director of community platform p_ft.